In A First, Top Army Commander Meets Families Of Terrorists In J&K, Asks To Bring Youths Back

This is the first time that the senior most army officer in the valley has met in person the families whose children have picked up guns. 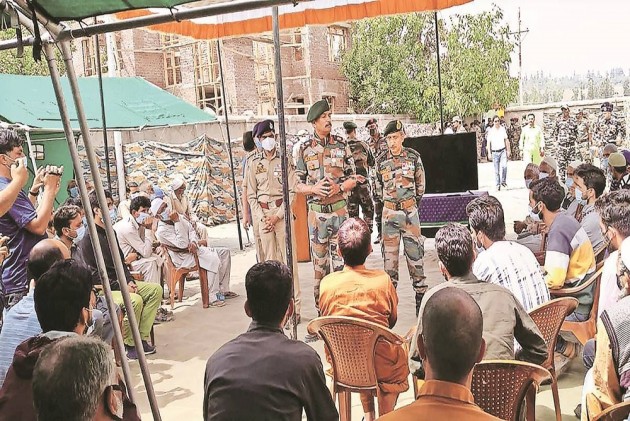 The top army commander in the Kashmir Valley on Tuesday met members of around 80 families in Jammu and Kashmir whose children have joined various terrorist groups and asked them to bring the youths back.

This is the first time that the senior most army officer in the valley has met in person the families whose children have picked up guns. A function was held at a stadium in this highly-volatile district of south Kashmir.

"I request you to pull out your children from the swamp called terrorism. I leave it up to you how you pull them out but please do it," General-Officer-Commanding of the Srinagar-based Chinar Corps Lt Gen D P Pandey told the families.

Inspector General of Police (Kashmir Range) Vijay Kumar told the parents that "police and security forces have been providing opportunities (to local terrorists) to surrender during live encounters since last year. Families are requested to convince their children (newly recruited terrorists) to come back".

The army commander cautioned the families against the "white-collar" terrorists roaming among the general masses and said "while the children of these while-collar terrorists are enjoying and studying in the rest of the country, your children are targeted by these people. Beware of them."

"I have come to you and I want to share that there are two aspects when a youth picks up guns. The first could be that he wants to impress girls or for drugs or is not good at education or even if he is good at education, he has fascination for guns.

"I had requested for a one-to-one meeting with you all to appeal to you to pull out your children quietly from terror groups. And let me tell you that even during operation, if some boy is ready to surrender, I assure you that the army will do whatever possible, even at the cost of suffering injury, to get your child back," he said drawing applause from the families.

The rest of the family members did not wish to be identified.

Later, a track-and-field competition was organised for the youth of various districts of south Kashmir, in which the Pulwama contingent emerged as the winner. Lt Gen Pandey handed over prizes to the winners.