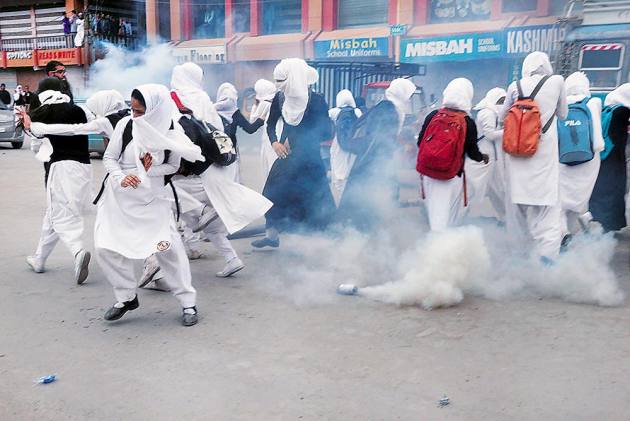 In a rare order, a court in Srinagar has asked the police to investigate and submit a report about the death of housewife due to inhalation of toxic gases caused by tear smoke shells fired by the police and security forces.

The court of chief judicial magistrate Srinagar said “the concerns of the petitioner that the reasons behind the death need to be addressed and the investigation is required to take all the subsequent developments.” The court also directed the police to investigate “the callous approach that resulted in non-registration of an FIR by the police agency concerned.” The court in its order issued early this week said, “there is no harm in registering of FIR into the incident of death of the deceased and investigate the circumstances under which death took place.”

The petitioner Mohammad Rafiq Shagoo had filed the petition seeking directions to the police to register FIR and investigate the cause of the death of his wife Fameeda.

People Running Out Of Patience In J&K: Mehbooba Mufti

Not A Place To Breathe: How Tear Gas Poses A Public Health Risk In Kashmir

According to the petition, Fameeda was killed on August 9, 2019, five days after the revocation of Article 370, due to inhalation of toxic gases caused by tear smoke shells fired by police and security forces at his house during a protest in the area.

On August 9, 2019, protest broke out in the Firdous Abad area of Bemina in Srinagar against the revocation of Article 370. The petition says the police and the security forces deployed in the area responded to the protests with heavy shelling and targeted the house of the petitioner firing tear gas shells at it without any reason. As the tear shells broke the windowpanes of the house and landed in and around the house, Fameeda, a young and healthy mother of two kids, felt choked and run out of her house. The petition says she fell down due to excessive inhalation of the toxic gas. The family members rushed her to a nearby hospital. On the way to the hospital, she was choking and blood was coming out of her mouth. When the doctors started attending her, foam came out of her mouth and she collapsed and died, the petition says.

According to the petition, her husband visited the police after some days of her young wife’s death to file an FIR. The petition says despite many visits the police refused to file FIR forcing him to approach the court. Earlier the police had reported to the Court that around 150 to 200 protesters appeared on the scene near JVC hospital and blocked the highway and pelted stones. The police said they had used tear smoke shells to disperse the mob. The police had said the allegation of the petitioner would be investigated in the light of the FIR registered on that day about stone-throwing.