In Assembly, Tejashwi Tries To Get Even With Nitish 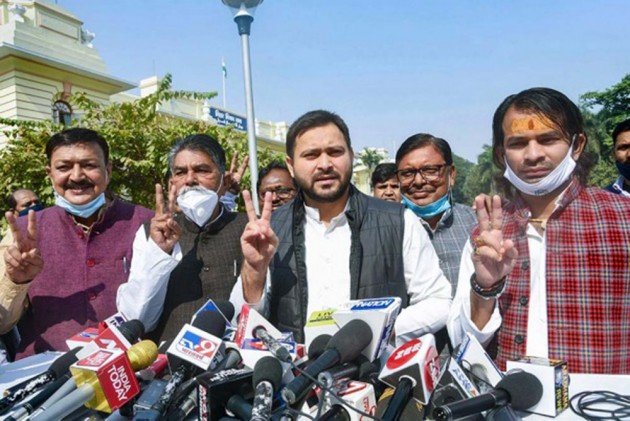 Bihar Chief Minister Nitish Kumar’s personal attack on his arch rival Lalu Prasad during the recently held Assembly elections evoked a visceral response from the latter’s son and Tejashwi Yadav, the Leader of the Opposition, on the floor of the state Assembly on Friday.

Tejashwi expressed anger over a speech made by the JD(U) chief in which he had made a reference to the RJD supremo’s large family, without mentioning them by name, and linked it to alleged preference of Lalu, on having a male offspring.

“I hope the chief minister is aware that the youngest child of my parents was a girl, born after two sons,” said Tejashwi, whose elder brother Tej Pratap Yadav is also a member of the state Assembly and younger sister Rajlaxmi Yadav is married in the family of Samajwadi Party president Mulayam Singh Yadav.

Bihar Should Have Law Against Love Jihad : Giriraj Singh

“Now let us come to the fact that the chief minister has only one son. Could we apply his own yardsticks and say that he did not have another out of fear that it could be a girl?” remarked Tejashwi.

The young RJD leader, who was taking part in the debate on the governors address to the newly constituted Assembly, expressed dismay that while he focused on "peoples issues" during the elections, the ruling NDA chose to do otherwise.

"I was speaking about jobs. And I bow before the people of Bihar who voted for us and helped us emerge as the single largest party. But for manipulations by pliant officials posted in places where results of tightly contested elections were overturned, we might have got the chance to fulfil our promises,” Tejashwi alleged.

"But my opponents had other priorities. A person no less than the Prime Minister indulged in name calling", said Tejashwi, in an oblique reference to the rallies of Prime Minister Narendra Modi who coined the expression "jungle raj ke yuvraaj" to berate the RJD leader.

"I do not like to make snide remarks against my elders. This goes against the values I have been brought up with. I have always addressed the honourable chief minister, even in speeches uttered in the public, as chacha (uncle)", said Tejashwi.

"But my point is, does it suit a chief minister to make such utterances," he asked with a rhetorical flourish to which Nitish Kumar responded with a charitable laugh.

He also vowed to keep the NDA on its toes, alleging that it was high on rhetoric but lacked "seriousness".

Turning towards Speaker Vijay Kumar Sinha, he said, “You asked members of this House to wear masks which shows your seriousness about the pandemic. I always carry a mask and make it a point to wear it too. But the seriousness or the lack of it on part of this government is self-evident.”

“The last time the House had met, it was a day-longsession. It was unanimously resolved that a committee on prevention of the spread of the contagion will be set up. The then Speaker Vijay Kumar Chaudhary is seated right here, now in his capacity as a member of the cabinet. The chief minister, who was supposed to walk the talk, is also here. You can find out from them how serious they are,” Tejashwi added.