Of the 16 migrant labourers who were run over by a train in Maharashtra’s Aurangabad, nine belonged to a village in Madhya Pradesh’s Shahdol. 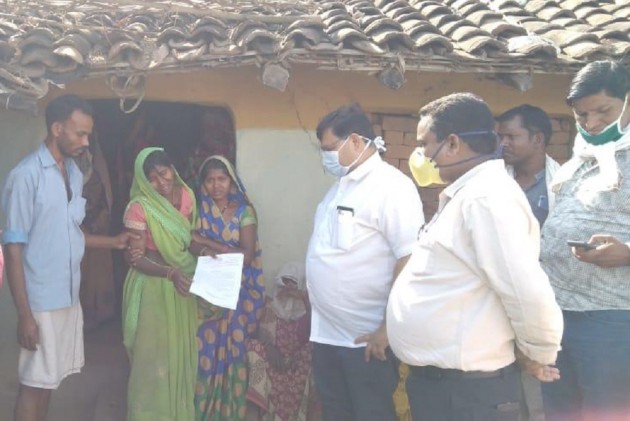 Deepak Singh’s body was among the nine that arrived at Antoli village on May 9 in the evening. An excavator was digging the graves as the bodies were taken out from the hearse, gently, for some were dismembered. Under the twilight sky, the air thick with sounds of wailing women, the soil of Antoli reclaimed its young sons. Generations will come and go, but the fateful day will live in the memory of this village in Madhya Pradesh's Shahdol.

A day or so before leaving from Jalna, Maharashtra, Deepak had called his maternal grandfather in the village. “Bohot kasht mein hain, bhookhe pyaase band hain (We are in great distress and stuck without food or water),” Bhola Singh recalled Deepak as saying. “I told him to stay put and manage somehow till the railway lines reopened. He was saying that half the people he knew had already left. I told him not to come on foot but he must have changed his mind later.”

The 26-year old was among the 20 people who left from Jalna for their native villages in MP. The distance was about 850 Km. Walking along the railway tracks, they stopped at a place to eat and rest. Tired, they fell asleep. At around 5 in the morning, a train ran over them. Four of them, who were sleeping slightly away from the tracks, survived. Of the 16 killed, 11 were from Shahdol while five were from the neighbouring Umaria district. Both are largely tribal districts and lack of employment opportunities results in a major outflux of workers every year.

Deepak grew up with his maternal grandparents after his mother died and father remarried. He spoke little with his father. “I always thought that when he’d grow older, he’d understand … beta beta hota hai, us pe zindagi udkaye hue the hum (He was my hope for oldage),” says Ashok, Deepak’s father, who has four daughters as well. Deepak leaves behind his 22-year-old wife and an 18-month-old son.

Most of those killed in the accident were related to each other. Deepak’s wife lost not only her husband but two of her brothers, Nirvesh and Ravendra as well. Another deceased, twenty four-year-old Dharmendra, was Deepak’s uncle. He had gone to Jalna in January 2020. Tej Pratap Singh Uikey, a Gondwana Ganatantra Party leader who has twice contested the local assembly elections, said that Dharmendra had worked with him during his political and social campaigns.

“He had called me in January and said that he was going to work at a steel plant in Jalna. He had no work in the village and at Jalna, he’d at least be able to work and earn daily. I told him to stay in touch and return by June, so that he could help his family during the paddy sowing season,” says Uikey. Dharmendra had also participated in the BSF recruitment drive, and though he qualified the running round, his knee problem led to his disqualification in the medical fitness round.

Shahdol district collector Satendra Singh says the MP government has given a 5-lakh rupee compensation to the families of each victim. “We have sent the letter to SBI and the amount would be transferred to them in a day or two,” he says, adding that some families will be getting additional amounts under other schemes of the state government such as Tendu Patta Shramik Kalyan Yojana (for the families engaged in produce of bidi leaves) and the Sambal Yojana (for workers in unorganized sector).