In Jammu, Azad Pleads For Statehood For J&K, Special Laws For Land, Jobs On Northeast Pattern

Our fight inside and outside Parliament will continue for the restoration of statehood to Jammu and Kashmir: Ghulam Nabi Azad 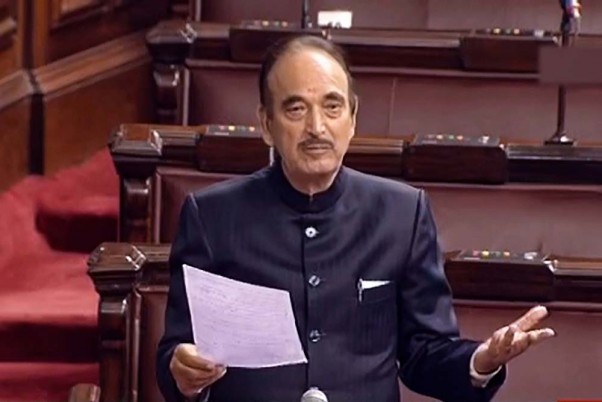 Launching a scathing attack on the administration mostly run by the bureaucracy in Jammu and Kashmir, he said instead of providing employment and education, the administration is coming up with orders of the imposition of different taxes every other day. “Except clothes people now wear here everything is being taxed,” Azad said.

He said of all states, Jammu and Kashmir is known throughout the world and it was grave injustice with J&K that it was downgraded, bifurcated, and turned into a Union Territory.

“Today we lost the identity of Jammu and Kashmir. Jammu and Kashmir has been reduced to a district. That is why our fight inside and outside Parliament will continue for the restoration of statehood to Jammu and Kashmir. We want our statehood back,” Azad said, addressing a rally of Congress workers in Jammu. The rally was earlier addressed by Congress leaders Raj Babbar, Manish Tewari, and others.

“As long as we do not have elected representatives and they cannot form the government, this darkness, and this unemployment and this ignorance will continue,” Azad said.

Trying to point out the schism between Leh district and Kargil district in the Union Territory of Ladakh, Azad said it is a fact Leh wanted to be Union Territory but no such demand ever came from Kargil. “Everyone in Jammu, whether he is from PDP, National Conference, BJP, or even from the RSS, want restoration of statehood. All parties want statehood back,” he said.

Besides statehood, Azad said Jammu and Kashmir and Ladakh need special protection for land rights and jobs. He said only people of Jammu and Kashmir should have the right to buy land in J&K and the same law should apply to Ladakh as well. “It is not something new. Such laws are already in vogue in Himachal Pradesh, Northeast and Uttarakhand. In these regions, there is no Article 370 and still, they have got protection for land and jobs,” Azad said.

He said if the current situation continues, most of the land rights will get affected in Jammu and Leh in contrast to Kashmir Valley and Kargil. He said all jobs should exclusively for the people of J&K. “I am not against anyone from outside J&K. But this is a Himalayan region with no industry. Where will the youths go for jobs?” he asked.

He said for the past 30 years, the people of Jammu and Kashmir have been fighting India’s war. “What have they been given in return? Nothing. Their state was bifurcated and downgraded. Unemployment has soared. The industries have been closed down and now the government is imposing all sorts of taxes on them, from water tax to the property tax,” Azad said.

In a scathing attack on the present administration, Azad said there is no talk of development and employment in Jammu and Kashmir but the only thing that is being done is the imposition of different taxes. “We have to fight on this front and another fight is on behalf of Congress across the nation,” he added. He said he hasn’t retired from politics after the expiry of his tenure at Rajya Sabha.