The Congress is contesting in all the 15 assembly seats as the ruling BJP, while the Janata Dal-Secular (JD-S) is in the fray in only 12 seats. 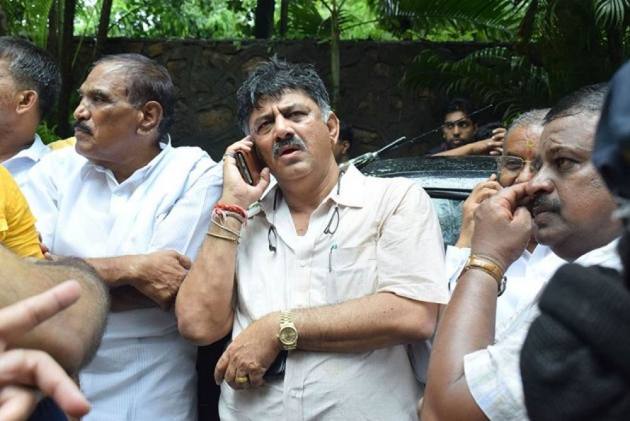 The opposition Congress is betting on the popularity of its trouble-shooter and senior leader D.K. Shivakumar to retain as many seats in the Thursday's by-elections in Karnataka's 15 assembly segments, a party official said on Tuesday.

"Shivakumar is our star campaigner along with former Chief Minister Siddaramaiah and party's state unit president Dinesh Gundu Rao in wooing the electorate to win most assembly seats, especially in Bengaluru and the old Mysuru region where he has lot of clout," Congress spokesman Ravi Gowda told IANS.

The Congress is contesting in all the 15 assembly seats as the ruling BJP, while the Janata Dal-Secular (JD-S) is in the fray in only 12 seats, which makes the crucial by-polls a straight contest between the national parties in 3 seats and triangular in a dozen seats.

The BJP has fielded 14 of the defectors, including 11 from the Congress and 3 from the JD-S as its candidates to wrest as many of the 15 seats from both the opposition parties had won in the May 2018 Assembly elections in the southern state.

"The people have lot of respect and sympathy for Shivakumar, as he is considered a victim of the BJP's 'high-handedness', which led to his arrest and 50-day jail in September-October in the alleged money laundering case, tax evasion and seizure of Rs 8.94-crore in cash from his Delhi house," a political analyst told IANS.

The Delhi High Court on October 23 granted conditional bail to 57-year-old Shivakumar in the money laundering case and set him free from Tihar jail in the national capital.

"Shivakumar's popularity across the state, especially among the politically dominant Vokkaliga community was evident on October 26 when he received a rock star reception at the airport on return to Bengaluru from Delhi and was taken in a huge procession to the party's office in the city," recalled Gowda.

The by-elections have been necessitated due to the disqualification of the 14 Congress and 3 Janata Dal-Secular (JD-S) rebel legislators after they resigned from their assembly seats in mid-July in protest against the former coalition government's poor functioning.

"Shivakumar is our best bet to woo the electorate in voting again for our candidates and teach a lesson to the defectors who betrayed the party and joined the BJP for money and power. He is our trump card in the Vokkaliga-dominated assembly segments in the state's southern region," added Gowda.

To blunt the BJP attack on Shivakumar for being arrested and jailed recently, the Congress was initially hesitant to push him in its campaign trail.

The formation of a coalition government by the Shiv Sena with the support of the Congress and the NCP in the neighbouring Maharashtra last week emboldened the party to make a lead campaigner in 5 assembly segments in Bengaluru, two in Mysuru district and one in Chikkaballapur which have a sizeable number of Vokkaligas, Kurbas, Backward Classes and Minorities.

The BJP, however, is not deterred by Shivakumar's popularity among the people, especially the Vokkaligas, as his alleged involvement in money laundering, tax evasion and amassing wealth disproportionate to his sources of income have dented his image and the party's reputation.

"In fact, Shivakumar in electioneering will prove to be counter-productive for the Congress as he has no credibility even among the Vokkaligas as he brought a bad name to the community by involving in money laundering and other illegal means of amassing wealth," charged BJP's state unit spokesman G. Madhusudan.