In Karnataka, Students Made To Wear Cartons During Exam To Avoid Cheating

The front side of the cartons was cut for the students to breathe and see but not peep left or right to see. 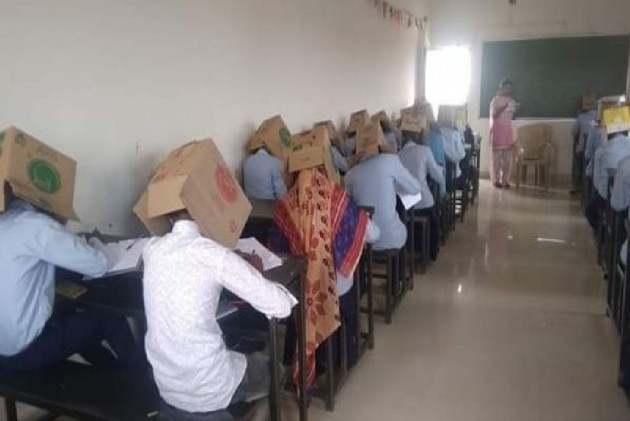 About 50 students of a pre-university college in Karnataka were forced to wear cartons to avoid copying in exams, an official said on Saturday.

"A notice has been issued to Bhagat Pre-University College seeking explanation for forcing its students wear cardboard boxes (cartons) while writing exams to prevent them from copying," a Haveri district Deputy Director of Public Instruction (DDPI) official told IANS on phone.

Haveri is 335 km from Bengaluru in the state's northwest region.

The shocking incident, which took place on Wednesday, came to light when a video clip showing students of the co-educated private college writing the exams wearing cartons ostensibly to prevent them copying went viral on the social media on Friday.

The students were writing papers in economics and chemistry subjects as part of the mid-term exams, conducted in their classroom.

"Whatever be the purpose, they (students) cannot be made to wear cartons for writing exams. There is no rule or advice from us," said the official.

The front side of the cartons was, however, cut for the students to breathe and see but not peep left or right to see the answer sheets of the other students seated on the same bench.

Reacting to the incident, state Education Minister S. Suresh Kumar said that such an attempt was not acceptable.

"Nobody has any right to treat anybody more so students like animals. This perversion will be dealt with aptly," tweeted Kumar.

Defending the preventive action, college head M.B. Satish told the media that a college in Bihar had used a similar method to check rampant copying during exams and was widely appreciated on the social media.

"We tried to see how it works as a trial and told the students in advance that boxes would be given to each of them to wear before writing the exam," he added.