More than 100 journalists working in international, national and local media outlets took part in the silent protest which started from Kashmir Press Club. 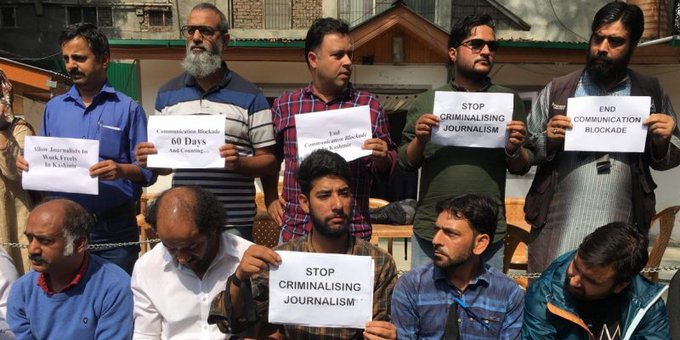 Over 100 journalists gathered in Srinagar on Thursday and took out a silent protest demanding that communication blockade which has been put in place in Jammu and Kashmir to be lifted.

They said the communication blockade, put in place on August 5 following the abrogation of Article 370, is set to enter its third month and it has severely affected the working of journalists in Kashmir.

"The communication blockade, which is set to enter its third month now, has severely affected the working of journalists in Kashmir. Even the local newspapers have not been able to publish properly while their internet editions are defunct," president of Kashmir Press Club Shuja ul Haq said.

Journalists working in international, national and local media outlets took part in the silent protest which started from Kashmir Press Club in Srinagar.

Haq said all the media associations have come together to press the government to lift the communication blockade so that they can freely discharge their professional duties.

While the Jammu and Kashmir government has established a media facilitation centre in a private hotel in Srinagar, however, the journalists feel that the facility is inadequate as there are only 10 computer terminals for nearly 400 strong press corps.

Meanwhile, J&K administration on Tuesday told the Supreme Court that there are no restrictions on newspapers, TV channels or the radio in the Valley.

In an affidavit filed in the top court on a batch of petitions questioning curbs, the J&K administration said that major newspapers are being published in the state and various national news dailies are also being distributed in Jammu, Kashmir and Ladakh division.

The affidavit also mentioned that many media persons have visited the valley and done various stories.