In Tamil Nadu, Tipplers Queue Up Outside Liquor Shops With Rarely-seen Discipline

The buying behaviour was in contrast to the crazy rush one witnessed in Delhi, Bangalore and other parts of the country when liquor shops reopened earlier this week 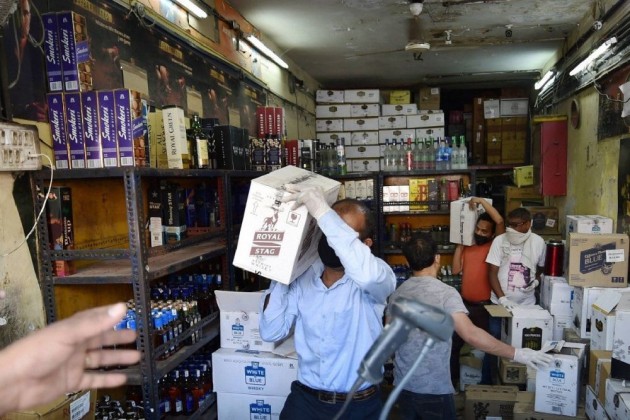 Tamil Nadu opened its liquor shops on Thursday after 45 days amid court-imposed curbs and restrictions based on age and limits on the quantity one can buy. Thanks to these conditions, the tipplers, eager to collect their booze quota, lined up with rarely-seen discipline, without rushing towards the shop counter.

The government-run TASMAC shops will remain open from 10 am to 5 pm in all districts except Chennai, but not everyone can buy through these working hours. The state DGP imposed a time-table according to which those above 50 years old can buy till 1 pm; those between 40 and 50 from 1 pm to 3 pm and those below that age for the last two hours. The buyers can get only two 750 ml bottles once in three days and will have to carry their Aadhaar cards, whose details are to be entered in the bills.

The buying behaviour was in contrast to the crazy rush one witnessed in Delhi, Bangalore and other parts of the country when liquor shops reopened earlier this week. It remains to be seen if the situation can be kept control by the authorities at the liquor shops given the enormous strain police force is already under.

In some cities, the local municipal corporation had given coloured passes to each household that permitted its member to step out only on those colour specific days to buy provisions and veggies. The same rule was now extended for liquor purchase as well. “Yes all these restrictions are a hassle, but at least we are assured of two full bottles once in three days, which should be sufficient,” said Pandian, a resident of Madurai city. Since the attached bars remain closed the buyers can consume the liquor only at their homes.

While police presence and barricades with horizontal space bars, ensured social distancing, some towns resorted to novel methods to ensure the tipplers stood at a distance. In Tiruppur, only those who came with an open umbrella were permitted to line up, automatically ensuring a three-feet distance between the people. A TV channel even showed a Tiruppur resident attempting a “dry" run on Wednesday walking through the temporary railings with an open umbrella. To cater to the unprepared, stalls selling umbrellas for Rs.150 and masks for Rs.10 also opened.

While the tipplers were a happy and relieved lot, women and children were not. Many of them organised protests outside the liquor shops.

Tamil Nadu: A group of women protest in Pykara area of Madurai district against state govt orders to open liquor shops in the state amid #CoronavirusLockdown. pic.twitter.com/8NGHAYQ2Vw

The opposition parties too protested against the move to open liquor shops pointing out that it would only help in spreading the coronavirus. “The state government has not learnt any lesson from the crowding at the Koyambedu wholesale vegetable market in Chennai that resulted in a spurt in corona cases. Unmindful of that they are opening the liquor shops just to boost their revenue without caring about the people’s health,” alleged DMK leader M.K. Stalin who along with his wife and son donned a black dress and protested in front of his house. Other opposition leaders observed a similar 15-minute protest in front of their respective homes.

The 35,000 state-run TASMAC shops earn Rs.33,000 crores per year in revenue for the government. This year the revenue is bound to take a hit due to the corona lockdown. Since the shops in Chennai that notch up the highest sales remain closed, the revenues are likely to take a further hit in spite of the state government increasing liquor prices by Rs.20 per 150 ml just ahead of the reopening.