Soon after his release from Taloja jail near Mumbai around 8.30 pm, Goswami drove to Republic TV studio, of which he is the Editor-in-Chief. 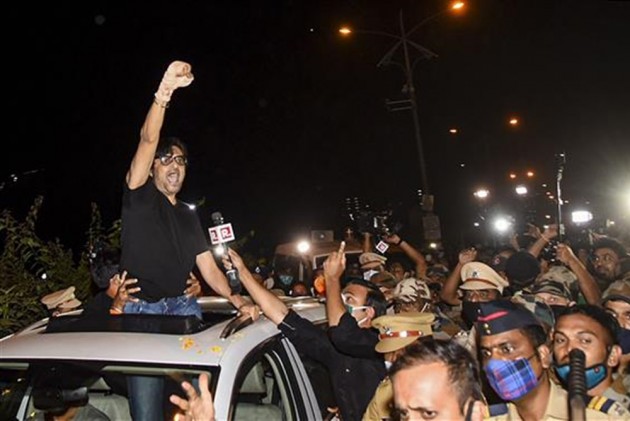 Back in the familiar environs of the TV newsroom after a week in judicial custody, journalist Arnab Goswami on Wednesday hit out at Maharashtra Chief Minister Uddhav Thackeray for arresting him in a ''fake'' case.

"Uddhav Thackeray, listen to me. You lost. You have been defeated," said Goswami (47), while being surrounded by visibly relieved colleagues from his Republic TV channel.

Soon after his release from Taloja jail near Mumbai around 8.30 pm, Goswami drove to the Lower Parel studio of the channel, of which he is the Editor-in-Chief.

Goswami said that while in Taloja jail since November 8, he was subjected to three rounds of police interrogation.

"Uddhav Thackeray, you arrested me in an old, fake case and did not even apologise to me," said Goswami, who was seen sporting a stubble.

"The game has just begun," he said and announced that he will launch Republic TV channel in every language and also have a presence in international media.

Saying he apprehended being arrested again, Goswami said, "I will launch (the channels) even from inside the jail and you (Thackeray) won't be able to do anything."

Thanking the Supreme Court for granting him interim bail, Goswami spoke a few words in Marathi, rounding off with the ''Jai Maharashtra'' slogan.

Goswami was released on Wednesday night, hours after the Supreme Court granted interim bail observing it will be a "travesty of justice" if personal liberty is curtailed.