National Conference president Farooq Abdullah Sunday called for talks with Pakistan for the sake of peace in the region. 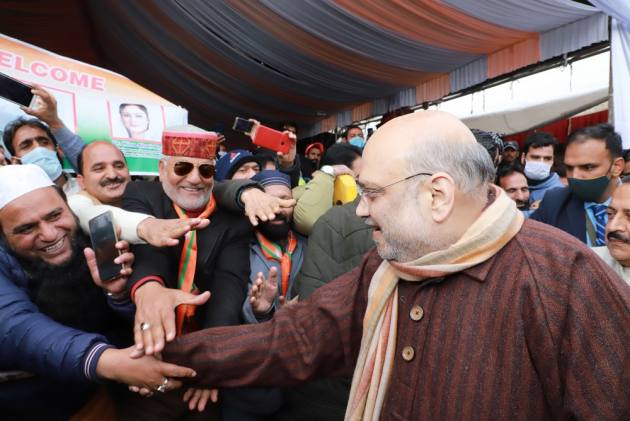 Home Minister Amit Shah today rejected the suggestion of the mainstream parties for having a dialogue with Pakistan over the Kashmir issue and said he would talk to people of J&K and its youth.

“Today I saw in newspapers Farooq Sahab (Farooq Abdullah) has suggested to me that the government of India should hold talks with Pakistan. He is an experienced person. He has remained chief minister of the state. It is his suggestion. But I want to tell Farooq Sahab and I want to tell you that if talks will be held, they will be with people of J&K and youths of Kashmir,” he said.

National Conference president Farooq Abdullah Sunday called for talks with Pakistan for the sake of peace in the region. “There cannot be peace in Jammu & Kashmir till Pakistan is roped in for talks.”

Addressing a public meeting in the Poonch district, Abdullah had said, “The Centre has been dishonest with Jammu & Kashmir. It scrapped articles 370 and 35A and made the region a Union Territory. If NC is brought to power, it will restore articles 370 and 35A,” he added.

Farooq Abdullah also said if Pakistan hadn’t been foolish in 1947, Maharaja Hari Singh, the last ruler of the princely state, would have kept Jammu & Kashmir independent.

Shah, who was wearing Kashmiri pheran, said he has come to visit Kashmir for the first time after the abrogation of Article 370 on August 5, 2019. “I am often asked by some people why curfew was imposed in Kashmir and why the internet was snapped,” he said. “Had we not snapped internet, had we not imposed curfew they would have instigated emotions of the youths. And who would have died in this? Only Kashmiri youth.  We didn’t want anyone would fire on Kashmiri youth. We know how heavy is the coffin of a young son for a father,”    he added.

Shah, however, said Article 370 was removed for the development of the region. “I want to tell you under the leadership of Prime Minister Modi, a new chapter of development has begun in Jammu and Kashmir especially in the Valley. I want to give you an assurance that by 2024 you will see a beautiful culmination of it.  Jammu and Kashmir’s development is the desire of the Prime Minister,” he added. “Remove fear from your hearts as no one will dare to halt Kashmir’s journey to development,”  he added. Shah said statements were given in J&K after abrogation Article 370 that land and jobs of people would be snatched. “Give me one example, of any village, where the land of any villager has been snatched,” he said. “They are spreading lies.”

Amit Shah said jobs will be given to those who deserve them. “Time is over now when people of J&K would have to pay money for jobs. Only those who have talent and merit are getting jobs,” he said. He said he met several Sufis and saints on this trip. He said Sufism reached Kashmir from Iran and Central Asia and Kashmir has given Sufism’s gift to the whole of India. “I have sat with them and I  have seen a ray of hope for everlasting peace in J&K  in their company.  That is why I want to appeal to Kashmiri youth, that those who gave stones and weapons in your (youths) hands they didn’t do any good to you.”

Former Chief Minister Mehbooba Mufti rejected the Home Minister’s development talk saying the Home Minister inaugurating international flights from Srinagar and laying the foundation of new medical colleges isn’t new. “Half a dozen medical colleges were sanctioned by UPA government and are functional now. Post Article 370 abrogation and an engineered crisis, J&K has been thrown into chaos. This crisis is of GOI’s making and instead of reaching out, they opted for cosmetic steps that don’t address the actual problem. Ideally, Home Minister’s visit should have been preceded by following up on PM’s assurances post the all-party meeting,” she added.

“CBMs such as lifting the siege that J&K has been put under since 2019, releasing prisoners, ending the harassment people here face on a daily basis, taking tangible steps to revive the economy especially horticulture would have provided a sense of relief. Instead prior to his visit 700 civilians were detained, booked under PSA and many shifted to jails outside Kashmir. Such oppressive steps further vitiate an already tense atmosphere. ‘Normalcy acrobatics’ are in full swing while the reality is denied and obfuscated,” she said.