As per the last count, nearly 44,000 people have been evacuated from flood-hit and rain-affected areas of Karnataka, where the rain fury has left 12 people dead in the past few days. 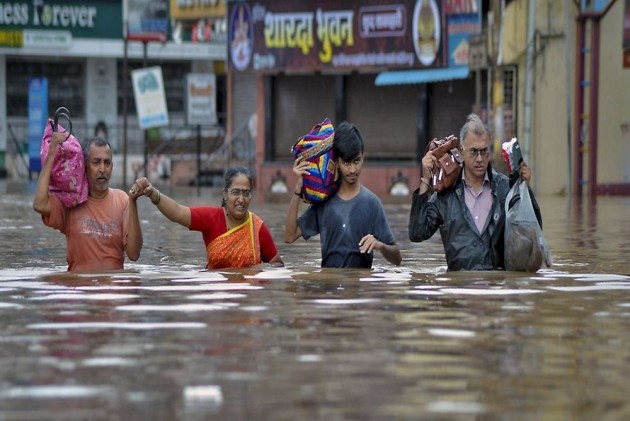 Incessant rains and flood situation have wreaked havoc and brought life to a standstill in various parts of the country, claiming at least 64 lives.

At least 30 people have been killed in various flood-related incidents in Maharashtra in the past one week even as more than 2.03 lakh people were evacuated to safer locations, officials said here on Friday.

According to Konkan Divisional Commissioner Deepak Mhaiskar, 12 persons died in Sangli, four in Kolhapur, seven in Satara, six in Pune and one in Solapur in various incidents.

At least four-five persons are still missing from the boat tragedy in Brahmnal village in Sangli where a Gram Panchayat's overloaded rescue boat capsized, drowning 12 persons.

With overnight rains subsiding, the waters have started receding in some parts of the worst-hit areas, giving relief to the residents and rescuers, though the India Meteorological Department (IMD) has issued a red alert in Pune, Sangli, and Kolhapur for heavy rains over the next couple of days.

On Thursday night, another 12 Indian Navy teams left for Sangli by road and are expected to reach there later today to join the rescue efforts.

After conducting an aerial survey yesterday, Chief Minister Devendra Fadnavis had said that an estimated 29,000 people still remain marooned in flood waters in these districts.

The floods have had their fallout in urban centres like Mumbai, Thane, Pune and other cities which are now witnessing shortage of milk, fruits and vegetables.

Rains continued to batter South India on Friday, with landslips and floods throwing life out of gear in Kerala leaving 22 people dead over the past three days and authorities scrambling to evacuate people from low-lying areas.

Over 80,000 flood-affected people were evacuated in Karnataka, as Tamil Nadu asked the IAF to be on stand by to be deployed for rescue activities in rain-ravaged Nilgiris district where five people lost their lives in various rain-related incidents.

Rail and air services were disrupted with Railways cancelling severak services while flight operations at the Kochi airport were suspended till Sunday due to inundation.

The Cochin International Airport (CIAL), where flight operations were initially suspended till midnight Friday after floodwaters inundated the apron area (parking), will now remain closed till 3 PM on Sunday.

Thousands of people have been stranded and lakhs of acres of land have submerged with Belagavi district bearing brunt of the rain fury.

Almost all the major rivers in the state including Krishna, Cauvery, Kaali, Varahi, Markandeya, Bheema, Malaprabha, Ghataprabha, Tunga, Bhadrawati, Hemavati, Sharavati, Netravati, Tungabhadra, Kumaradhara, Varada, Kabini and their tributories are in spate, leaving thousands of people in the lurch.

The situation turned grim in Korangaala in the Bhagamandala area of Kodagu district, the catchment of River Cauvery, when four bodies were brought out from under a house -- on a foothill -- collapsed due to landslip.

In Andhra Pradesh, 31 members belonging to the fishing community, including 12 women, who were trapped in the raging Godavari river at Polavaram were rescued by the Navy.

The damage caused by the rainfall was known after the flood water receded from the submerged areas on Friday and the situation returned to normal, they said.