The prime minister said 'tracking, tracing, testing' and vaccination was the only way to check the spread of virus in Varanasi, his Lok Sabha constituency. 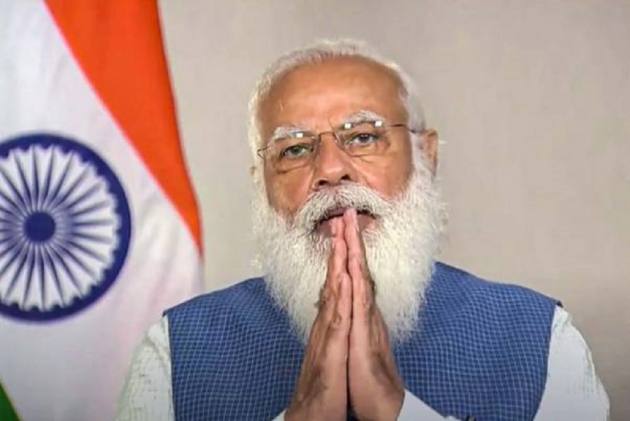 Prime Minister Narendra Modi on Sunday reviewed the Covid19 crisis in his Lok Sabha constituency, Varanasi. The PM also stressed on the need for vaccination of every citizen over 45 years of age.

He urged the local administration of the city to exercise sensitivity while helping the people, and asserted that the combined cooperation of society as well as the government is necessary to curb the pandemic.

According to a report, Modi emphasised  'tracking, tracing and testing', saying this has to be followed to check the spead of the virus, in the same manner the first wave was curbed.

UP: Covid-19 Vaccine Transported On Bicycle In Varanasi During Dry Run

Speaking to local officials and people's representatives, the prime minister asked the administration to ensure that preventive measures like social distancing and the use of masks are practised.

"The prime minister underlined the importance of the vaccination exercise and asked the administration to raise awareness among everyone over 45 years about it," the statement said.

As the member of Parliament from Varanasi, he has also been taking regular feedback from people, Modi said, adding that expansion and modernisation of medical infrastructure in the city have helped in fighting the pandemic.

The availability of beds, ICU and oxygen facility is being increased, he said.

Noting that the administration has set up the 'Kashi COVID Response Centre', the prime minister said other steps should also be carried out swiftly.

He was also informed about the mechanism put in by the administration, including a control room for contact tracing, a command and control centre for home isolation and a dedicated phone line for ambulance service.

Also, telemedicine was being made available through a control room to deal with the rising Covid cases. The statement said 1,98,383 people have got the first dose of the Covid vaccine, while 35,014 have got both the jabs.