The doodle made by Kolkata-based artist Sayan Mukherjee "celebrates India's Independence Day and its cultural traditions forged in centuries of historical progress. 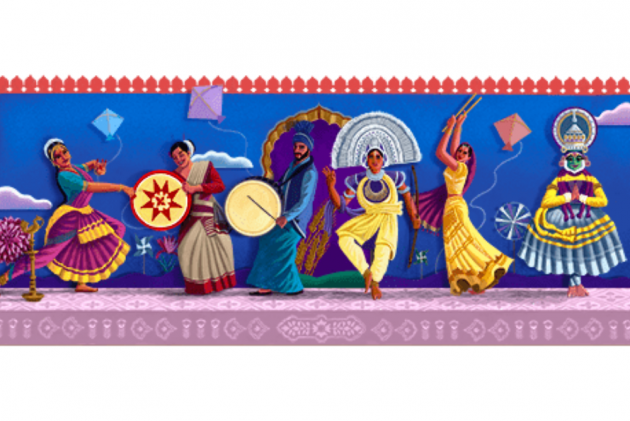 Google has brought together India's cultural diversity and multi-faceted dance forms, ranging from Bharatanatyam to Purulia Chhau, in a vibrant doodle to mark the country's 75th Independence Day.

The search engine giant shared the special doodle o Sunday, even as the country celebrated Independence Day with fervour.

The digital artwork is a veritable palette of colours with dancers or the props held by them, representing the letters of 'Google'.

The doodle made by Kolkata-based artist Sayan Mukherjee "celebrates India's Independence Day and its cultural traditions forged in centuries of historical progress," according to information shared by Google on its website.

The six artistes, donning colourful traditional costumes, stand in a row, on a platform adorned with old heritage designs, to add to the festive atmosphere.

The one portrayed on the extreme left of the doodle is a Bharatanatyam dancer in a resplendent dress and an evocative 'mudra' forming the 'G' of 'Google', while a Kathakali dancer in dazzling costume syabda is on the other end of the spectrum with folded hands.

After the Bharatanatyam dancer, stands a woman in Bihu costume, holding a jaapi -- the traditional hat of Assam -- forming the letter 'O', followed by a Bhangra dancer from Punjab, beating a 'dhol', the percussion instrument forming the second 'O' in the search giant's name.

Purulia Chhau dancer with the colourful headgear is the next in line followed by a 'garba' dancer from Gujarat with a pair of sticks in her hands, completing the line-up.

“India is inhabited by one-sixth of the total global population and is characterized by the thousands of distinct languages and ethnic groups within its borders. Indians across the subcontinent's 29 states celebrate their freedom and multicultural spirit with customs such as traditional dance performances, which vary depending on regional culture," the search giant said.

The doodle artwork illustrates these diverse forms of dance. Depicted on the far right, the masked reenactments from Indian epics known as Chhau dance have origins in the eastern state of Jharkhand, the Purulia Chhau, and the Seraikella Chau regions, it added.

"In honour of this historic day, today's doodle artwork depicts the medieval Derawar Fort, a massive square edifice with a symmetrical perimeter of 40 massive circular bastions built in the 9th century," the search engine major wrote on the artwork on August 14.

“Located in the vast expanse of western Pakistan's Cholistan Desert, each of these ancient stone fortresses rises nearly 100 feet from the sand and comprise an imposing symbol of Pakistani adaptability and antiquity," it said.