With nearly two years since Covid-19 became a pandemic, the possibility of a 'third wave' of Covid-19 had been around for months. But now, numbers seem to confirm the grim possibility. 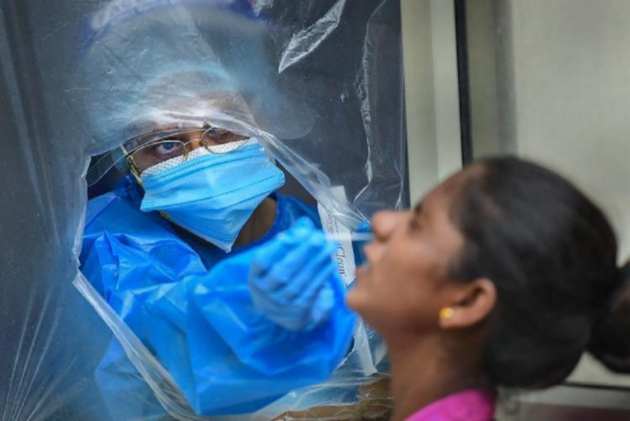 India is entering the new year with intrepidity and fear of the third Covid-19 wave, driven this time by the Omicron variant of Covid-19.

With nearly two years since Covid-19 became a pandemic, the possibility of a "third wave" of Covid-19 had been around for months since India's Principal Scientific Advisor K VijayRaghavan announced in October that another wave was "inevitable". Not just VijayRaghavan, several other experts at the time were also of the opinion that a third wave of the Covid-19 pandemic was just around the corner. And now, with a fresh surge in Covid-19 cases across the country, these fears seem to be coming true.

Even as India entered the new year, rising numbers of Covid-19 across the country are an indicator the country is already in the early throes of a third wave.

Delhi on Friday recorded 1,796 fresh Covid cases, the highest single-day rise since May 22, and zero death while the positivity rate mounted to 2.44 per cent, according to data shared by the city health department.  On Thursday, 1,313 cases were recorded with a positivity rate of 1.73 per cent, according to officials figures. The daily cases count had breached the 1000-mark after a gap of seven months.

Mumbai on Friday reported 5,631 new COVID-19 cases, almost 2,000 more than Thursday, which took the caseload in the city on the last day of the year to 7,85,110. Data from other states and union territories have also showed a spike in cases.

Has the “third wave” already begun?

Yes, according to experts. “India is in the early stages of another wave. Both numbers, as well as test positivity rate, has started going up in several places, especially in larger cities,” noted virologist Shaahid Jameel tells Outlook.

The surge in cases impacted New Year and Christmas celebrations in the form of curbs and Covid-19 protocols that prevented many from stepping out. While crowds managed to sneak past security in several instances as viral images on social and legacy news media show, the impact of Omicron was evident, which according to experts, will be led by Omicron.

After Delta, the third wave to be driven by Omicron

Experts agree that the third wave will be driven by Omicron and not Delta which took thousands of lives in the last wave earlier in 2021. “Delta has already been around all this time when cases kept going down. The surge is almost certainly coming from Omicron,” Jameel said. Data from Delhi shows that that might be true. According to Delhi Health Minister Satyender Singh Jain, 50 per cent of all Covid-19 being genome sequenced in Delhi are testing positive for Omicron. In Mumbai, where a majority of Omicron positive residents have shown no travel records, “community transmission” of the new variant seems to already have begun.

However, one can only be sure of what particular variant is driving a Covid-19 wave by genome sequencing. Jameel fears that the inevitable delay in sequencing might lead to a lag.

What to expect in case of a third wave

Being driven by Delta, the Omicron wave is expected to spread quickly and infect a large number of people in a short span of time. However, despite the high number of cases, the severity of the disease is expected to be low and the chances of hospitalisation are also low as opposed to previous variants like Delta.

But a sudden surge in cases may put a strain on the healthcare system of India. “A small fraction of a very large number is also a large number. There may be some pressure on hospitals and the healthcare network, especially when healthcare workers start getting even mildly sick. This is also the experience of every country affected by Omicron. India would be no exception,” Jameel said.

More lockdowns might be in order. Several states and union territories have already dialled up their Covid-19 protocols and guidelines. The national capital of Delhi has been put on “Yellow Alert” after Omicron cases surged ahead of the last week of the 2021. States like Maharashtra, Uttar Pradesh, Gujarat and others have already instituted night curfews and travel guidelines for people. Schools and educational institutions are expected to go back to online mode yet again.

Is India prepared for another wave of Covid-19?

The Indian SARS-CoV-2 Genomics Consortium ( INSACOG ), jointly initiated by the Union Health Ministry of Health, and the Department of Biotechnology (DBT) has been advising the government on its fight against Covid-19. INSACOG’s Anurag Agrawal agrees that a small fraction of a large number is enough to put stress on the healthcare system. But he also adds with a note of optimism that India is more prepared than the last wave to handle the Omicron outbreak.

"In my opinion, it should not get as bad as the second wave, but that is small consolation. I am never for lockdowns but am not seeing the responsible behaviour that would avert the need for drastic measures,” says Agarwal. Jameel agrees that though the third wave might lead to some stress on the healthcare system, the overall damage should remain minimal.

Will boosters or precautionary doses help?

While boosters may have a moderate effect on reducing Omicron infections, they are reasonably expected to reduce the risk of severe disease in Omicron [positive patients.

“Precautionary third shots are ways to boost the immune response in those who receive them. I expect that protein subunit vaccines will give a better boost than a third dose of the same vaccine. However, we should go ahead with what is available and approved,” Agarwal tells Outlook.

India recently added two new indigenous vaccines - Covovax and Corbevax, to its arsenal of vaccines. Jameel, who has long been in support of granting approval for emergency use to the two vaccines, says that both vaccines have shown good efficacy in phase 3 trials and that they can be produced in very large amounts and used to supplement India's vaccination programme.

But with five elections coming up next year, can the country afford to rely on just vaccinations? While many have been talking about “natural immunity”, not much research has been done into it. Sources tell Outlook that in villages in Uttar Pradesh, cases of unrecorded Covid-19 deaths have already begun. Will 2022 spell a new chapter in India's fight against Covid-19?

As Jameel puts it, “there was a very painful lesson during the second wave. Hopefully, the same mistakes will not be repeated”.

Rakhi Bose What To Expect In 2022 National
Advertisement