India And China Have Agreed To Push For Early Disengagement Of Frontline Troops At LAC: Officials

India and China held extensive deliberations on modalities for disengagement of troops from all the friction points in eastern Ladakh during the ninth round of military talks, officials said 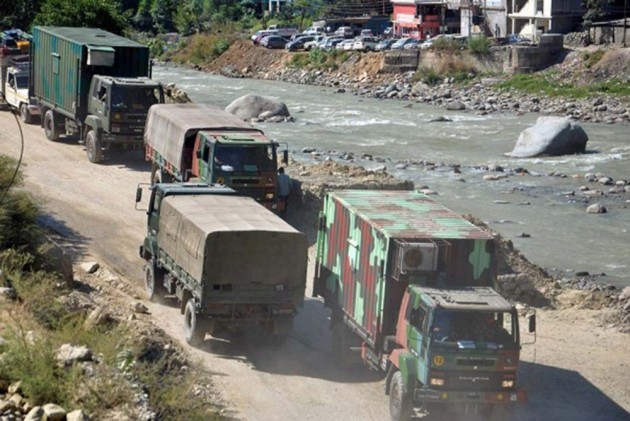 Military commanders of India and China had a candid and in-depth exchange of views on disengagement along the Line of Actual Control (LAC) in eastern Ladakh, officials said on Monday.

Military commanders of India and China held extensive deliberations on modalities for disengagement of troops from all the friction points in eastern Ladakh during the ninth round of the military talks that lasted nearly 16 hours, official sources said on Monday.

The Corps Commander-level talks at the Moldo border point on the Chinese side of the Line of Actual Control in eastern Ladakh began at around 10:30 AM on Sunday and ended at 2:30 AM on Monday, officials said.

"Detailed discussions were held on modalities for the disengagement process," said a source aware of the negotiations.

The sources said India insisted that it was up to China to carry forward the process of disengagement and de-escalation at friction points in the region where the two militaries have been engaged in an eyeball-to-eyeball face-off for nearly nine months.

India has been maintaining that the disengagement process has to start simultaneously at all friction points and no selective approach was acceptable to it.

Hours after the talks concluded, it came to light that Indian and Chinese troops were involved in a clash in the high-altitude Naku La region in North Sikkim on January 20, an incident described by the Indian Army on Monday as a "minor face-off".

In a statement, the Indian Army said the face-off was resolved by local commanders as per established protocols.

Close to 100,000 Indian and Chinese troops are deployed in eastern Ladakh as both sides have been holding on to their ground and showing readiness for a long-haul, amid continuing diplomatic and military talks to find an amicable solution.

Reflecting India's firm approach in handling the situation, Army chief Gen MM Naravane nearly two weeks back said that Indian troops will hold their ground as long as it takes to achieve the "national goals and objectives" even as he hoped for an amicable resolution of the standoff through talks.

Sunday's talks took place nearly two weeks after India handed back to China a soldier of the People's Liberation Army after apprehending him at the southern bank of Pangong Tso in eastern Ladakh. It is learnt that India's gesture has generated a positive atmosphere.

The Indian delegation at the talks was led by Lt Gen PGK Menon, the Commander of the Leh-based 14 Corps while the Chinese side was headed by Maj Gen Liu Lin, the commander of the South Xinjiang military district of the People's Liberation Army (PLA).

In the military talks, India has all along been demanding restoration of status quo ante in all areas of eastern Ladakh prior to April. The face-off had begun on May 5.

The eighth and last round of the talks had taken place on November 6 during which both sides broadly discussed disengagement of troops from specific friction points.

The seventh round of Corps Commander-level talks had taken place on October 12 where China had pressed for the withdrawal of Indian troops from a number of strategic heights around the southern bank of Pangong lake.

Last month, India and China held another round of diplomatic talks under the framework of Working Mechanism for Consultation and Coordination (WMCC) on India-China border affairs. However, no concrete outcome emerged from the meeting.

This round was held with a specific agenda of exploring ways to implement a five-point agreement reached between External Affairs Minister S Jaishankar and his Chinese counterpart Wang Yi at a meeting in Moscow on September 10 on the side-lines of a Shanghai Cooperation Organisation(SCO) conclave.