Will the new year, which began on a sweet note for the neighbouring countries, bring in a change in the tense relations between India and Pakistan? 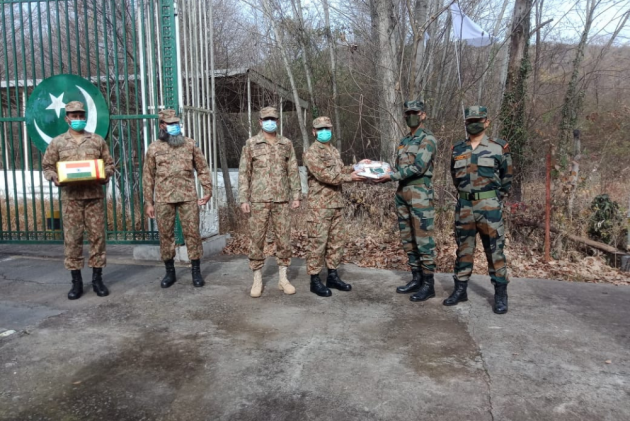 The Indian and Pakistan armies exchanged sweets across the LoC to mark the start of the new year in a bid said to promote mutual trust and tranquillity between the two neighbouring nations.

“At beginning of the year 2022, to promote mutual trust and tranquillity, Indian Army exchanged sweets and greetings with Pakistan Army at Poonch and Mendhar crossing points,” Jammu based defence spokesman said Lt Colonel Devender Anand said. He said considering the ongoing ceasefire along the India-Pakistan border, this gesture is aimed at further enhancing peace and harmony in Jammu and Kashmir.

On Feb 25, the DGsMO of India and Pakistan renewed the ceasefire agreement and issued a joint statement that said, “In the interest of achieving mutually beneficial and sustainable peace along the borders, the two DGsMO agreed to address each other’s core issues and concerns which have the propensity to disturb the peace and lead to violence. Both sides agreed for strict observance of all agreements, understandings and cease firing along the Line of Control and all other sectors with effect from midnight February 24-25 Feb 2021.”

Up to Feb 24 from January 2021, otherwise, the Indian army says, 740 ceasefire violations were recorded.

In 2019 over 3,200 instances or an average of nine ceasefire violations were reported daily. Of these, 1,565 ceasefire violations took place since August 2019, after the BJP government abrogated Article 370 and bifurcated the erstwhile state of Jammu and Kashmir into the two union territories amid communication blockade, siege and arrests of over 8000 people including three former chief ministers. But 2020 saw 5,100 incidents of ceasefire violations which are the all-time high in the past 17 years killing 36 people and wounding 130 others.