A complainant had alleged that artwork at India Art Fair was related to the ongoing protests against the Citizenship Amendment Act. 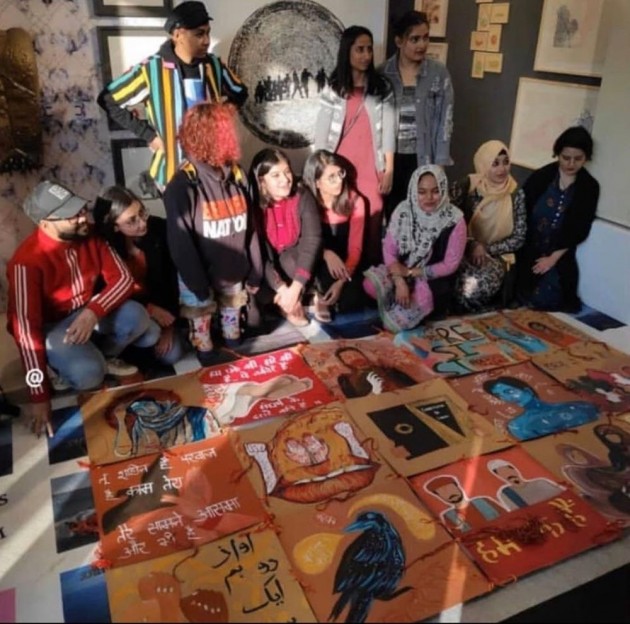 After the authorities at India Art Fair took down an art installation that was alleged to have links with anti-CAA protests, the artists and curators have alleged that the piece of art has gone missing,

The artwork in question was taken down by the Art Fair authorities on Sunday and the booth at the Italian Embassy Cultural Centre was sealed after police appeared at the event over a complaint by a visitor.

The complainant had alleged that the artwork was related to the ongoing protests against the Citizenship Amendment Act.

Gargi Chandola, who was involved in creating the piece titled ‘The Wall’, said it was to celebrate "the strength, beauty and unity of women". Chandola said that 10-12 artists came together to create multiple panels which were eventually tied together with threads brought from a temple and a Sufi shrine. The audience was invited to tie the works after the live art-making session was over.

As the artwork remains missing since Sunday, the curators and artists claimed it was supposed to be in the Art Fair's possession.

An official enquiry will be made about the artwork that was "confiscated" by the Art Fair authorities, said Myna Mukherjee,  who conceptualised and curated the piece along with co-curator Davide Quadrio. She further said that the police did not have it.

"It is highly irresponsible," she said about the Art Fair which was supposed to return the piece to the curators.

"It was supposed to be a travelling piece and exhibited elsewhere. It belongs to us as we have commissioned it," she added.

But the Art Fair says it has never had possession of the said artwork.

The artists raised questions over freedom of expression and censorship in a space such as the Art Fair.

"I can understand the police acting on a complaint and not understanding the artwork. But it was not expected from the Art Fair authorities, who did not even try to understand what was being said. They yelled at the artists," said Mukherjee. "Just because these young women were in Hijab, it was already assumed that the content was inflammatory," she said.

The police initially left after asking questions to the artists and intervention by the curator to explain things. A senior police official told the PTI news agency that they received a PCR call that some paintings depicting the CAA were being exhibited at the fair. "A police team was sent to check it, but no such painting was exhibited," he said.

"The artwork was not about CAA at all. It was inspired by the courage and resilience shown by women protesting with ideas that they believe in. Young women artists from Shaheen Bagh and Jamia Millia Islamia participated in making the art. We have not brought our personal stances on the citizenship law into this and the artists also took cognisance of the same." said Mukherjee.

"The police came in soon after the artwork was put up citing an anonymous complaint lodged against it. The piece was being made for seven-eight hours and someone from the audience must have complained about it," Artist Yaman Navlakha told Outlook, adding that they, along with the curators, explained the work to the police to clear any doubt.

The police, they said, asked them about the intention behind the work.

"In the work, there was a couplet in Urdu which was from a poem by Iqbal and had no political meaning. On being asked about it, we explained it to the police," Navlakha said.

Following the police intervention, the Art Fair had distanced itself from the work and said they were not "informed about activities at the booth".

“We were not informed about activities at the booth. In fact, post the incident, the fair director spoke with the Italian Ambassador who confirmed they too had not been informed of the activities taking place in their booth. The organisers only became aware when the police arrived,” their statement said. It added that "as a result of the actions of one of the curators of the Italian Embassy Cultural Centre, the police came to the fair."

However, the curator said all information about the live installation and its schedule was intimated to the authorities beforehand. Outlook accessed screenshots of messages sent by Mukherjee to Art Fair director Jagdip Jagpal on February 2 showing the same.

The Art Fair has pointed out that it was not an "exchange" messages. "An individual sending unsolicited messages to another individual does not amount to an exchange of messages," it said.

Defending the taking down of the piece, the organisers in their statement said while they "embrace the freedom of expression”, ensuring the safety and security of their visitors was “paramount".

Later, the Italian Embassy in a statement said the police had concluded that the artwork was not "political in nature".

"Even if they had acted under panic, they should have apologised later to the artist for how they behaved and the way the artwork was taken down," Mukherjee said alleging that the Fair's claim about not knowing about the installation was not true. "The police was more understanding than the Art Fair authorities."