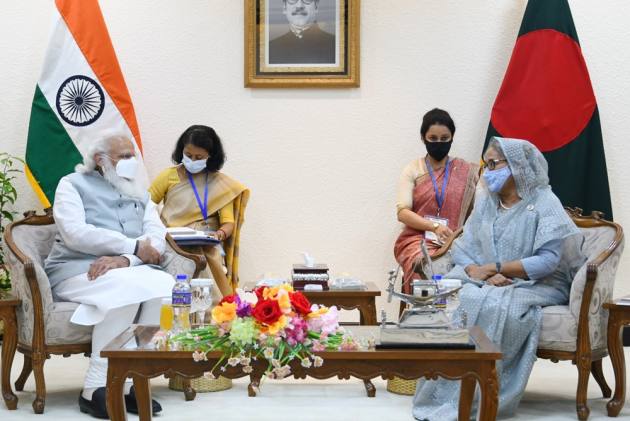 During the meeting, PM Modi and Hasina reviewed the full range of bilateral ties and discussed ways to deepen the economic and cultural linkages in the times to come.

Modi, who is visiting Bangladesh on his first trip to a foreign country since the outbreak of the coronavirus, held one-on-one talks with Hasina which was followed by delegation-level meeting which continued for over an hour.

"Had a productive meeting with PM Sheikh Hasina. We reviewed the full range of India-Bangladesh relations and discussed ways to deepen economic and cultural linkages in the times to come,” Modi tweeted.

Had a productive meeting with PM Sheikh Hasina. We reviewed the full range of India-Bangladesh relations and discussed ways to deepen economic and cultural linkages in the times to come. pic.twitter.com/pdRvJ7x3ho

"India and Bangladesh signed MoUs in key sectors such as disaster management, sports and youth affairs, trade, technology and more. These will add strength to our development partnership and benefit the people of our nations, especially the youth," Modi said.

This is the third passenger train after Maitree Express (Dhaka-Kolkata) and Bandhan Express (Khulna-Kolkata) running between the two neighbouring countries.

The other projects included: foundation stone laying of a monument at Bangladesh's Ashuganj in memory of 1971 martyred Indian soldiers; extended development work at Rabindra Bhawan Kuthibari in Shilaidaha of Bangladesh's Kushtia and ground breaking for Infrastructure Development for Power Evacuation Facilities of Rooppur Nuclear Power Plant.

The supply of ICT equipment, courseware and reference books and training for Bangladesh-Bharot Digital Service & Employment and Training (BDSET) Center, and Establishment of Sports facilities at Rajshahi College field and surrounding areas were other MoUs.

Prime Minister Modi also reiterated India's "sincere and continued efforts" to conclude the Teesta water-sharing agreement in consultation with relevant stakeholders during his talks with Hasina.

"The Indian side also requested for early finalisation of a draft for sharing of water of Feni River pending with the Bangladeshi side," Foreign Secretary Harsh Vardhan Shringla told reporters.

Modi's visit is taking place at a time Bangladesh is commemorating Mujib Borsho, the birth centenary of Sheikh Mujibur Rahman and 50 years of the country's war of liberation. The two countries are also celebrating 50 years of the establishment of diplomatic ties.

On Friday, Modi attended the celebrations of the golden jubilee of the country's independence, the birth centenary of ‘Bangabandhu’ in Dhaka

Earlier in the morning, Prime Minister Modi offered prayers at the centuries-old Jeshoreshwari Kali temple in Ishwaripur village in southwestern Bangladesh and announced that India would construct a community hall-cum cyclone shelter attached to the temple, which is one of the 51 Shaktipeeths in the Puranic tradition.

He also visited the mausoleum of Sheikh Mujibur Rahman and paid floral tributes to him, becoming the first-ever foreign Head of State or Head of Government to pay homage at the grave of 'Bangabandhu' at Tungipara in southwestern Bangladesh.

Orakandi is the abode of hundreds of Hindu Matua community, a large number of whom are residents of West Bengal.

Speaking to the Matua community members after offering prayers, Modi said both India and Bangladesh want stability, love and peace instead of instability, terror and unrest in the world.