The government said the virus infection has not entered the community transmission stage as the lockdown and containment measures prevented a rapid spread. 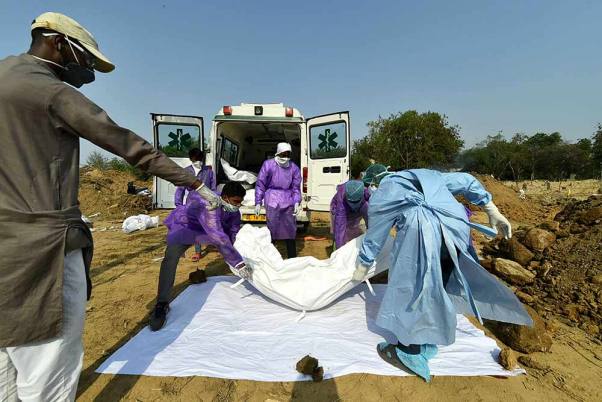 The nationwide COVID-19 tally neared 2.9 lakh on Thursday with a record one-day increase of nearly 10,000 cases taking the count of infections detected this month to almost one lakh. The government, however, said the virus infection has not entered the community transmission stage as the lockdown and containment measures prevented a rapid spread.

However, A PTI tally of figures announced by various states and union territories showed the total number of confirmed cases having risen further to nearly 2.89 lakh and the death toll to 8,485, as of 9.20 PM. India is the fourth worst-hit nation by the Covid-19 pandemic after the US, Brazil, Russia, according to latest data.

The death toll also saw a record single-day increase of over 350 fatalities to move closer to the 8,500-mark, more than one-third of which have been recorded in 11 days since June 1 -- the day that marked the beginning of a phased exit from most restrictions imposed under a nationwide lockdown with effect from March 25.

A few curbs were eased during the four-phase lockdown period itself, while some restrictions are still in force, including on functioning of metro rail, regular international flights and educational institutions, and are to be lifted in a graded manner.

In its morning update, the Union Health Ministry said the total number of confirmed COVID-19 cases has risen to 2,86,579 after a record number of 9,996 cases were reported in 24 hours since Wednesday 8 AM, while the death toll also saw its biggest single-day increase of 357 in this period to reach 8,102.

The nationwide case count stood at about 1.9 lakh on morning of June 1, while the death toll at that time was less than 5,400.

While the case count has registered an increase of 9,500-10,000 cases for seven straight days, the one-day jump in the death toll crossed the 300-mark for the first time.

On the positive side, the number of recoveries exceeded the active cases for the second consecutive day. The ministry said the number of active cases stood at 1,37,448 as of 8 AM on Thursday, as against more than 1.4 lakh having recovered so far -- giving a recovery rate of over 49.2 per cent.

Globally, more than 74 lakh people have tested positive for the dreaded virus infection ever since its emergence in China last December and nearly 4.2 lakh have lost their lives so far. However, close to 35 lakh people have recovered too.

Also Read: We Are In The Grip Of Covid Community Spread, No Point Denying It: Former AIIMS Director

According to the World Health Organisation (WHO) data, the countries that have seen community transmission of the virus infection include the US, the UK, Spain, Italy, Germany, Turkey, France, South Africa, Brazil, Mexico, Canada, Sweden, Switzerland, Bangladesh, Indonesia and Philippines.

Many of these countries have lower case count than India, but figure among the nations having witnessed 'community transmission' -- a term typically used when a clear-cut contact tracing cannot be established for a large number of confirmed cases of infection.

For India, the transmission classification used by the WHO is 'cluster of cases', which it describes as a stage where a country experiences cases "clustered in time, geographic location and/or by common exposures".

At a press briefing on the COVID-19 situation in the country, the government officials said India is definitely not in the community transmission stage of COVID-19 spread.

Citing results from the country's first sero-survey on the COVID-19 spread, Indian Council of Medical Research (ICMR) Director General Balram Bhargava said the lockdown and various containment measures were successful in preventing a rapid rise in infections, but a large proportion of the population still remains susceptible.

He also said that the people living in urban areas face higher risks than those in the rural parts of the country, while the risk is even higher for those in the urban slums.

The survey also found a high infection rate within the containment zones, but the fatality rate was found to be very low overall at just 0.08 per cent.

Since a large proportion of the population is susceptible and infection can spread, non-pharmacological interventions such as physical distancing, use of face mask or cover, hand hygiene, cough etiquette must be followed strictly, Bhargava said.

Urban slums are highly vulnerable for spread of the infection and local lockdown measures therefore need to continue, he said.

The elderly people, children below 10 years of age, people with chronic morbidities and pregnant women also fall in the high-risk category, he said.

In the meantime, several states stepped up their efforts to contain the spread and to enhance their healthcare infrastructure, though many experts have also warned against extending the lockdown curbs due to their high economic costs and a worsening job market scenario.

A survey by the Indian Society of Labour Economics showed that job loss is the most severe immediate impact of COVID-19 crisis while lower economic growth and rise in inequality would be the long-term effects.

Uttar Pradesh, Delhi and Telangana have asked for Indian Railways' isolation coaches. The first such COVID-19 care centre has been deployed at Shakur Basti railway station, which consists of 10 coaches with a capacity of 160 beds.

The coaches can be used for very mild cases that can be clinically assigned to the coronavirus Care centres according to guidelines issued by the health ministry.

In Maharashtra, Chief Minister Uddhav Thackeray said that the state government has succeeded in setting up an adequate number of healthcare facilities for treatment of COVID-19 patients in a short span.

The state saw the tally of COVID-19 cases in Mumbai's slum colony of Dharavi nearing the 2,000 mark with the addition of 20 new cases. The death toll from the area also rose to 75.

In the neighbouring Gujarat, the tally rose to 22,067 with the addition of 513 new cases in the last 24 hours, while the toll increased to 1,385, the state health department said.

Delhi reported a record number of 1,877 new coronavirus cases, pushing its tally over 34,000, while the death mounted to 1,085, authorities said.

The historic Jama Masjid in the national capital was closed for devotees with immediate effect till June 30, the mosque's Shahi Imam Syed Ahmed Bukhari said. His secretary Amanullah died due to COVID-19 on Tuesday night.

Two railway officials also tested positive for coronavirus at Rail Bhavan in the national capital, taking the total number of cases detected so far in the building to 18, officials said.

In Odisha, 136 more people, including 54 disaster response personnel who were engaged in cyclone Amphan relief work in West Bengal, tested positive, raising the state's tally to 3,386.

Uttar Pradesh reported 24 more coronavirus deaths and 478 new cases, the biggest single-day spike in both numbers so far for the state. The death toll in the state now is 345 after three consecutive days of record highs, while the case count has reached 12,088.

Tamil Nadu reported 1,875 new cases and 23 deaths during the day, While Kerala reported 83 new fresh cases and one fatality.