All the staff from Afghanistan was brought back in the C-17 Globemaster aircraft of the Indian Air Force. 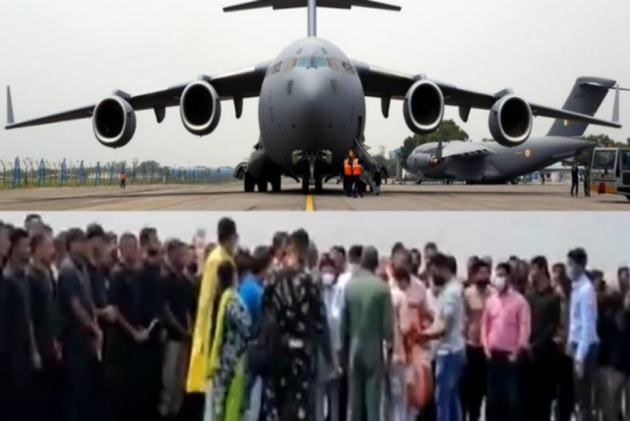 India brought back its ambassador and other staff from Afghanistan amid heightened tension in the country following Taliban takeover on Tuesday.

All the staff from Afghanistan was brought back in the C-17 Globemaster aircraft of the Indian Air Force.

The military transport aircraft brought back nearly 150 people including diplomats, officials, security personnel and some stranded Indians from Afghanistan. The IAF aircraft landed at the Hindon airbase near the national capital at around 5 PM, after a brief halt at Jamnagar in Gujarat.

It is the second evacuation flight as another C-17 aircraft brought back around 40 people from the Hamid Karzai International (HKI) Airport in Kabul on Monday as part of India's emergency evacuation mission that was carried out following coordination with relevant authorities including US officials handling security at the airport in the Afghan capital.

It is the second time that India evacuated all its staff from the embassy in Kabul after a similar exercise was carried out in 1996 when the Taliban first captured power.

Indian Ambassador to Afghanistan Rudrendra Tandon told media persons in Jamnagar that the situation in Kabul is complex and "quite fluid" now, and the remaining Indians stuck in the city will be brought back home when the commercial flight services resume.

"Happy to be back home safely and securely. We are a very large mission. We are a mission of 192 personnel who were evacuated from Afghanistan literally within a period of three days in a very orderly fashion in two phases," he said.

Tandon, who assumed charge as Indian ambassador in Afghanistan in August last year, said the embassy provided assistance and even shelter to many distressed Indians following the fast-changing situation in Kabul.

"We are continuously monitoring the situation because there are still some Indian citizens who are there. That is why Air India will continue to run its commercial services to Kabul as long as the airport in Kabul functions," Tandon said.

Tandon said India will remain in contact with the Afghan people and will continue to work for their welfare.

"It's not that we have abandoned the people of Afghanistan, their welfare and our relationship with them is very much on our minds. We will try and continue our interaction with them. I can't say in what form as the situation is changing," he said.

"Your welcome has an impact on all of us. Thank you to the Indian Air Force who flew us out under conditions that are not normal," he said.

Asked about the stranded Indians, he said the embassy extended help to many of them.

"There are a lot of Indian citizens who found themselves in distress because of the fast-changing situation. So, our policy was that anyone who reached the embassy was taken into the embassy. I don't know how they managed inside the embassy but we were sure that they were safe and secure and there was an avenue for an exit," he said.

The people who have returned on board the aircraft included two Delhi-based journalists who had gone to Afghanistan to cover the unfolding developments after the Taliban began capturing key provincial capitals.

In the morning, External Affairs Ministry Spokesperson Arindam Bagchi said it was decided that the ambassador and his Indian staff will move to India immediately considering the circumstances in Kabul.

"In view of the prevailing circumstances, it has been decided that our Ambassador in Kabul and his Indian staff will move to India immediately," Bagchi tweeted

In view of the prevailing circumstances, it has been decided that our Ambassador in Kabul and his Indian staff will move to India immediately.

Officials said the two military aircraft flew into Kabul using the Iranian airspace while avoiding the route through Pakistani airspace.

Earlier, External Affairs Minister S Jaishankar, who is in New York on a four-day visit, spoke to US Secretary of State Antony Blinken and discussed the latest developments in Afghanistan.

"Discussed latest developments in Afghanistan with @SecBlinken. Underlined the urgency of restoring airport operations in Kabul. Deeply appreciate the American efforts underway in this regard," he tweeted at around 3 AM.

It is learnt that Jaishankar was also involved in hectic discussions including with US officials on the evacuation of the Indian officials from Kabul.

The US military had taken control of the security at the airport on Monday after thousands of desperate people converged there in the hope of getting on an evacuation flight and leave the country.

Hours after Afghan President Ashraf Ghani fled Afghanistan on Sunday, the Taliban took control of Kabul, capturing power nearly 20 years after a US-led military invasion ousted it in the aftermath of the 9/11 attacks.

In a series of tweets, Jaishankar also said that India is monitoring the situation in Kabul continuously.

"Monitoring the situation in Kabul continuously. Understand the anxiety of those seeking to return to India. Airport operations are the main challenge. Discussions on with partners in that regard," he tweeted.

Monitoring the situation in Kabul continuously. Understand the anxiety of those seeking to return to India. Airport operations are the main challenge. Discussions on with partners in that regard.

"Significant UN Security Council discussions today on developments in Afghanistan. Expressed the concerns of the international community. Expect to discuss these during my engagements at the UN," he added.

Expect to discuss these during my engagements at the UN.

In another tweet, he said the government is in constant touch with the Sikh and Hindu community leaders in Kabul, adding their welfare will get its priority attention.

"Given the Kabul situation, important we have accurate information about Indians there. Urge that this be provided by all concerned to the MEA Special Afghanistan Cell," he said.

Given the Kabul situation, important we have accurate information about Indians there. Urge that this be provided by all concerned to the MEA Special Afghanistan Cell at:

The contact details of the Cell are phone number: +919717785379 Email: MEAHelpdeskIndia@gmail.com. (With PTI inputs)