Indo-China Ties: Jaishankar Urges For Disengagement ‘At All Fraction Points In Ladakh’ 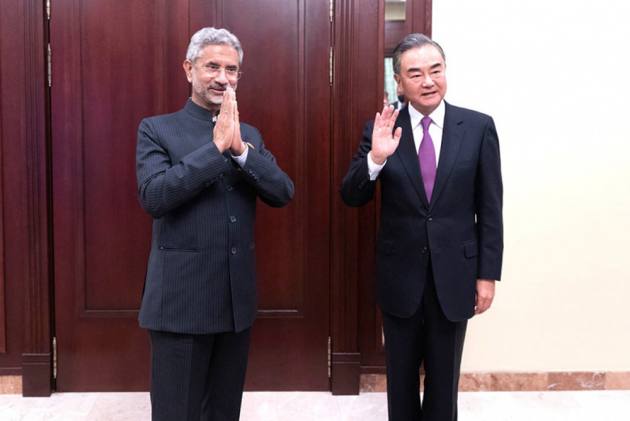 India and China have agreed to establish a hotline for "timely" communication and exchange of views, officials said on Friday.

The move comes just days after both the nations successfully carried out disengagement of frontline troops along the banks of Pangong Tso in eastern Ladakh, last week, putting an end to a nine-month long military border standoff.

However, India has told China that disengagement at all friction points is necessary to contemplate de-escalation of troops in eastern Ladakh. External Affairs Minister S Jaishankar made the comments on Friday during the first high-level contact both the sides have has since the completion of disengagement process.

Is India’s Truce With Neighbours Merely A Spring Thaw Or Will It Hold?

Jaishankar told his Chinese counterpart Wang Yi during a telephonic conversation on Thursday that peace and tranquillity on the border is essential for development of bilateral relations.

Releasing details of the 75-minute conversation, the Ministry of External Affairs (MEA) said in a statement on Friday that China was told that bilateral relations have been impacted severely during the last year. The tense military standoff in eastern Ladakh erupted on May 5, 2020.

The two leaders discussed the situation along the Line of Actual Control (LAC) in eastern Ladakh and issues related to overall India-China relations.

"EAM said that Boundary Question may take time to resolve but disturbance of peace and tranquillity, including by violence, will inevitably have a damaging impact on the relationship," the MEA said.

"The two ministers agreed to remain in touch and establish a hotline."

"A prolongation of the existing situation was not in the interest of either side. It was, therefore, necessary that the two sides should work towards early resolution of remaining issues. It was necessary to disengage at all friction points in order to contemplate de-escalation of forces in this sector. That alone will lead to the restoration of peace and tranquillity and provide conditions for progress of our bilateral relationship," the MEA statement said.

According to a late-night press release issued by the Chinese Foreign Ministry in Beijing on Thursday, the two foreign ministers agreed to set up a hotline for "timely communication and exchange of views".

Wang said China and India should firmly follow the right path of mutual trust and cooperation between neighbouring major countries, and not go astray with suspicion and distrust nor fall back on a road of "negative retrogression".

Wang, also a State Councilor, noted that the two countries need to properly handle the border issue so as to prevent the bilateral ties from being trapped into a "vicious cycle" because of it.

When asked for an update on disengagement of troops in other areas after the withdrawal of soldiers by both sides from the Pangong lake area, Chinese Foreign Ministry spokesman Wang Wenbin told a media briefing on Friday that the situation on the ground has significantly eased.

“Recently frontline troops of both sides completed disengagement in the Pangong Lake area and the situation on the ground has significantly eased,” he said.

“The two sides should cherish this hard-won momentum and consolidate existing outcomes, maintain the momentum for consultations, further ease the situation, improve border management and control mechanism, advance negotiation on the boundary issue to accumulate mutual trust and safeguard peace and tranquillity along the border," he added.

Asked when the two countries would set up a hotline for the foreign ministers, the spokesman said the two sides will remain in communication on the matter.

The MEA statement said Jaishankar also referred to his meeting with Wang Yi in September 2020 in Moscow where the Indian side had expressed its concern on provocative behaviour and unilateral attempts of the Chinese side to alter the status quo at the LAC.

Jaishankar said they had agreed that the situation in the border areas was not in the interest of either side and decided that the border troops of both sides should continue their dialogue, quickly disengage and ease tensions.

The EAM noted that the two sides had maintained continuous communication since then through both diplomatic and military channels. This had led to progress as both sides had successfully disengaged in the Pangong lake area earlier this month.

Noting the completion of disengagement in the Pangong lake area, the EAM emphasized that both sides should now quickly resolve the remaining issues along the LAC in eastern Ladakh.

At the 10th round of the senior commanders' meeting least week, India is learnt to have insisted on a faster disengagement process in areas such as Hot Springs, Gogra and Depsang to defuse tension in the region.

Jaishankar told Wang that once disengagement is completed at all friction points, then the two sides could also look at broader de-escalation of troops in the area and work towards restoration of peace and tranquillity.

Wang, on his part, expressed satisfaction at the progress made so far and said it was an important step forward for restoration of peace and tranquillity in the border areas, according to the MEA statement.

Wang also spoke about the need to improve management and control in the border areas, while Jaishankar highlighted that both sides had always agreed that maintenance of peace and tranquillity in the border areas was essential basis for development of bilateral relations.

Wang also noted that the Indian side had proposed "three mutuals" -- mutual respect, mutual sensitivity and mutual interests -- as the approach to the relationship. He also agreed on the importance of taking the long view of ties between the two neighbours.

According to the Chinese Foreign Ministry release, Wang also said border disputes are an "objective reality" and need to be attached adequate attention and taken seriously. However, the border issue is not the whole story of China-India relations, and should be placed in a proper position in their relationship, he said.

"Wang said that the rights and wrongs of last year's situation in China-India border areas are very clear, and profound lessons should be drawn from the past," the Chinese foreign ministry statement said.

The border standoff between the Indian and Chinese armies erupted on May 5 last year following a violent clash in the Pangong Lake area and both sides gradually enhanced their deployment by rushing in tens of thousands of soldiers as well as heavy weaponry.