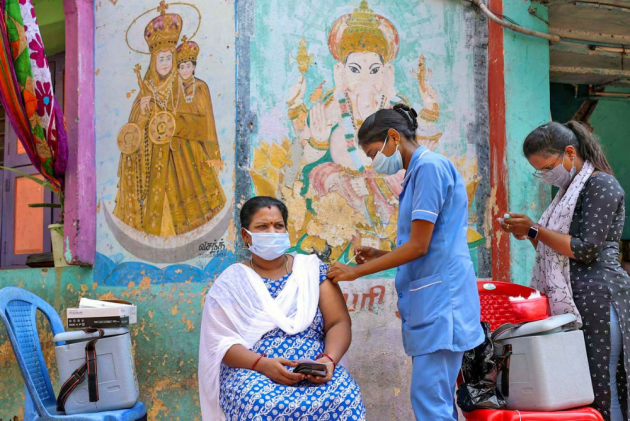 To mark India's vaccination milestone after the country successfully administered 100 crore doses of Covid-19 vaccine, the country is set to celebrate at a grand scale. To mark the important milestone, the Archaeological Survey of India (ASI) will light up 100 of its heritage monuments in colours of the national flag.

This will be a tribute to health professionals, frontline workers, scientists, vaccine manufacturers and the citizens of the country who bravely fought the pandemic, they said.

The officials said it is part of the activities to celebrate the landmark achievement across the country.

Today, when India has achieved a #VaccineCentury, I went to a vaccination centre at Dr. Ram Manohar Lohia Hospital. The vaccine has brought pride and protection in the lives of our citizens. pic.twitter.com/MUObjQKpga

The prime minister also visited the vaccination centre at the Ram Manohar Lohia Hospital here after the milestone was achieved and interacted with hospital officials, staff and some of the beneficiaries.

Other activities and events that will be conducted to mark the jubilant event include the display of a Rs 1,400 kg flag -- the largest tricolour in India -- at Delhi's Red Fort. Union Health Minister Mansukh Mandaviya will be launching a new song by singer Kailash Kher to mark the event. An audio-visual film will also be released.

The cumulative Covid-19 vaccine doses administered in the country surpassed the 100-crore milestone on Thursday.

In a tweet, Union Health Minister Mansukh Mandaviya congratulated the country on achieving the feat, and said it was the result of the able leadership of Prime Minister Narendra Modi.

According to official sources, around 75 per cent of India's all eligible adult population has been administered at least the first dose and around 31 per cent has received both the doses of the vaccine.