Harsh Vardhan emphasised on how the Indian traditional system of medicine has also contributed substantially in 'boosting the immunity of general population during COVID-19'. 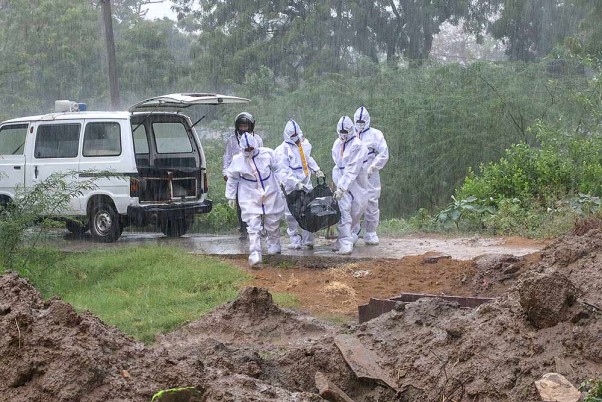 At 864 cases and less than 21 deaths per million population, India has one of the world's lowest COVID-19 infection and death rate, Union Health Minister Harsh Vardhan on Friday said underlining that the recovery rate among coronavirus-infected patients in the country is 63.45 per cent and the mortality is 2.3 per cent.

These remarks were made by Vardhan at the Shanghai Cooperation Organisation (SCO) Health Ministers' Digital Meet held digitally, the health ministry said.

According to the ministry's statement, Vardhan emphasised on how the Indian traditional system of medicine has also contributed substantially in 'boosting the immunity of general population during COVID-19'.

"There is currently no institutional mechanism within SCO to discuss cooperation in traditional medicine that has the potential to fulfil the WHO Traditional Medicine Strategy 2014-2023 and also reinforce the effective implementation of the joint statement on cooperation in combating epidemics signed at the Qingdao Summit in 2018," the statement quoted him as saying.

"This is in spite of such complementary medicine systems being widely practised in all member states of our SCO," he said and proposed the setting up of a new sub-group on traditional medicine under the existing institutional meetings of the SCO health ministers.

Expressing his condolences at the loss of lives across the world due to COVID 19, Vardhan described the India's political commitment to contain the pandemic and spoke on how Prime Minister Narendra Modi has "personally monitored the situation and ensured a preemptive, pro-active and graded response to prevent the deadly virus from spreading".

He explained that a series of actions were initiated in a graded way that included issuing of travel advisories, point-of-entry surveillance, community-based surveillance, enhancement of laboratory and hospital surge capacities, wide dissemination of technical guidelines on managing different aspects of disease outbreak and communicating risk to the public.

"The consecutive lockdowns provided India with much required time and opportunity to build up on technical know-how, laboratory capacities, hospital infrastructure and also to build up its pharmaceutical and non-pharmaceutical interventions," Vardhan said.

Speaking on the result of the lockdown he said, "India has so far reported 1.25 million cases and more than 30,000 deaths due to COVID. At 864 cases per million and less than 21 deaths per million of our population, India has one of the world’s lowest infection and death rate.

The Union Health Minister also spoke on the increase in testing capacity and health infrastructure during the lockdown and after, the statement said.

On logistics, Vardhan said, "India didn't have a single manufacturer of personal protective equipment (PPE) and now the country has developed indigenous capacity in the past few months to the extent that the country can export quality PPEs.

"Similar scaling up was also done for achieving other indigenous capacity and reducing the demand & supply gap for ventilators and medical oxygen."

He also elaborated on the innovative use of information technology in virtually every aspect of COVID management.

"Aarogya Setu app and ITIHAS, a cellular-based tracking technology, are used for surveillance and identification of potential clusters of disease, RT-PCR app for testing, facility app for managing information on admitted patients and hospital bed capacities, all integrated with a single COVID portal."

According to the statement, Vardhan called upon all member nations to rise in this time of crisis and mitigate the effect of COVID on health and economy.

He also congratulated all the frontline staff dealing with the pandemics and called them "no less than God for humanity".