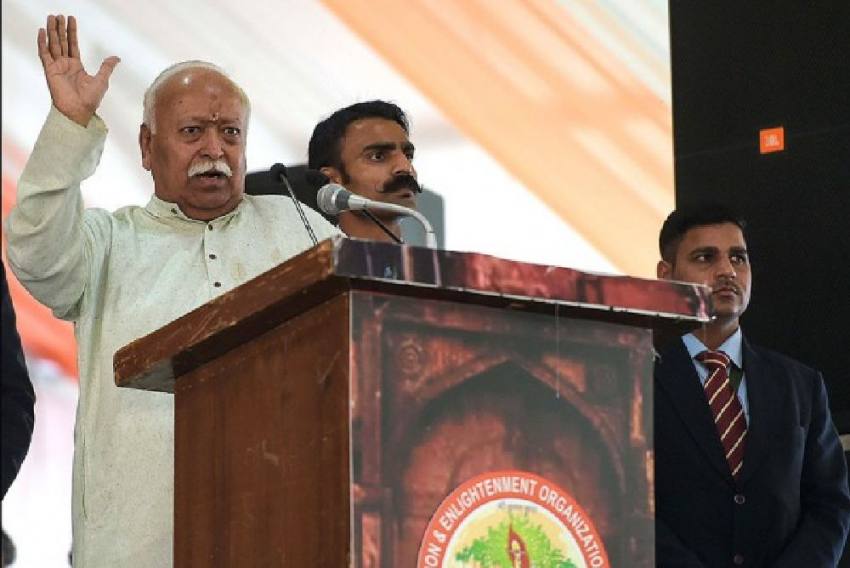 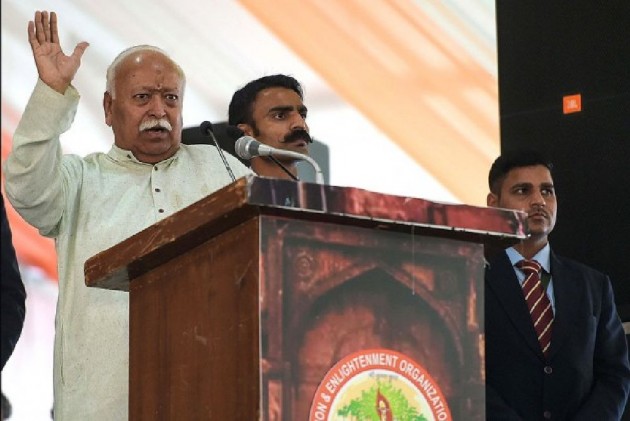 RSS chief Mohan Bhagwat on Wednesday said that for Sangh all 130 crore Indians are part of Hindu society, irrespective of their region, religion and culture.

He told a public meeting of Rashtriya Swayamsevak Sangh (RSS) in Hyderabad that Sangh considers all 130 crore Indians as "Hindu Samaj".

"When I say Hindu Samaj, it includes those who consider India their motherland, love its 'jal, jungle and janwar', have the nationalistic spirit and respect its culture. Irrespective of the languages they speak, the regions they come from, their forms of worship and even if they don't follow any religion, all are children of India," he said.

Stating that the Sangh wants to unite all, he asked the cadres to go door to door to explain what the organisation stands for.

Bhagwat said that 'Dharma Vijay' is the idea of Sangh, Hindu Samaj and India. He also remarked that the country is traditionally "Hindutva- vadi".

Stating that RSS workers at its 'shakhas' spend daily one hour doing practice for 'Dharma Vijay'. he said: "This is the thinking of not just the Sangh but of all Indians. They have inherited this."

Bhagwat said that those working for 'Dharma Vijay' are "selfless people who remove the sufferings of others and work for the betterment of the society and the country".

The RSS chief believes that this 'moral force' should win over two other forces who, he alleged, were playing their tricks in India. According to him, one force is of those who live in pain and also want to see others in pain while another force works only for its vested interests.

Claiming that RSS is working selflessly to remove the sufferings of others, he said every village and every habitation need teams of such selfless workers. "This will change the society and India's destiny," he said.

Stating that the world is looking towards India for guidance for peace and happiness, he said only an organised 'Hindu Samaj' can deliver this.

Bhagwat was addressing RSS cadres and people at Saroornagar Stadium on the outskirts of the city.

The meet was organised to coincide with the three-day winter camp titled 'Vijaya Sankalpa Sibiram', which began on Tuesday at Ibrahimpatnam on Tuesday. This is the first state-level camp of RSS since the formation of Telangana state in 2014.

Earlier, about 7,000 lathi-wielding RSS cadres marched through the streets on the outskirts of to reach the meeting venue.

At L. B. Nagar, Bhagwat welcomed rallies of RSS cadres reaching there from four different directions.

UP Anti-CAA Protests: Notices To 60; 1000 FIRs Against Unidentified People For 'Violence'