On Friday, Chief of Army Staff Gen Manoj Mukund Naravane witnessed the culmination of the exercise and lauded the troops of both contingents for their high standards of training and professionalism. 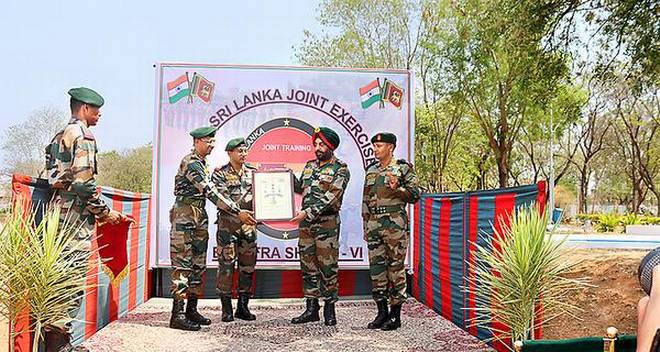 Indian Army on Saturday said that MitraShakti21, the joint 12-day mega military exercise between India and Sri Lanka has the potential to further promote synergy and interoperability amongst the two armed forces alongside contributing in further strengthening of the bilateral ties.

Chief of Army Staff Gen Manoj Mukund Naravane on Friday witnessed the ending of the exercise and applauded the troops of both contingents for their high standards of training and professionalism.

The 8th edition of the Exercise #MitraShakti21 between the Indian and the Sri Lankan Army culminated at the island nation's eastern district of Ampara, the Indian Army said in a tweet.

The 12-day mega military exercise from October 4 to 15 began with a focus on enhancing counter-terror cooperation at the Combat Training School in the district.

"Besides promoting synergy & interoperability amongst the Armed Forces, exercise further helped in cementing ties between both the nations," it said.

Gen. Naravane visited the headquarters of the Sri Lankan Navy on Saturday and interacted with its Commander Vice Admiral Nishantha Ulugetenne and other senior officers.

"Views on bilateral defence partnership between both Nations were exchanged," the Indian Army said in a tweet.

"COAS discussed ways to further strengthen defence cooperation between both countries," the Indian Army said in a tweet.

He also visited the Defence Services Command & Staff College of Sri Lanka and gave a talk on "India's security perspective" to the student officers & faculty.

Army chief Gen Naravane arrived here on Tuesday on a four-day visit at the invitation of his Sri Lankan counterpart Gen Shavendra Silva.

The joint exercise got underway with the participation of an all arms contingent of 120 Indian Army personnel, headed by Colonel Prakash Kumar.

The joint military exercise has been designed to enhance understanding of transnational terrorism, inter-operability skills, conduct of joint tactical operations, sharing of each other’s best practices and experiences, the Sri Lanka Army said.

The annual training programme, which has largely contributed to strengthen bilateral military cooperation, understanding and bonds of neighbourly relations between both services, takes place alternately either in India or Sri Lanka every year, it added.