The total number of COVID-19 positive cases in India has climbed to 35,043, including 25007 active cases, 1147 deaths, 8889 cured/discharged/migrated, according to the ministry. 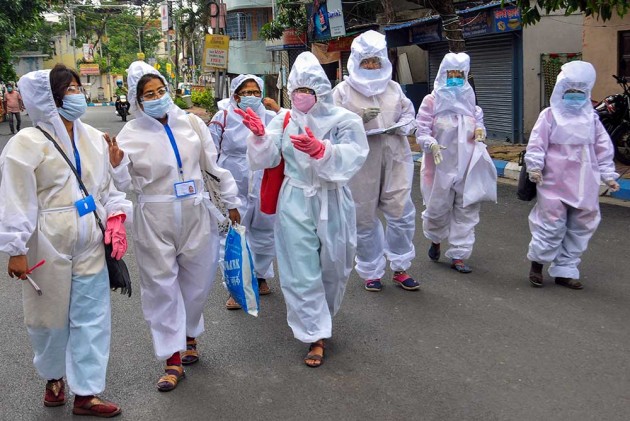 In the biggest-ever jump in deaths and cases in 24 hours, India has reported 73 fresh fatalities, the Ministry of Health and Family said on Friday morning, adding another 1,993 people had tested positive for the novel Coronavirus during the same period.

With the new deaths, the total number of fatalities due to the COVID-19 has risen to 1,147.

The total number of COVID-19 positive cases in India has climbed to 35,043, including 25007 active cases, 1147 deaths, 8889 cured/discharged/migrated, according to the ministry.

The coronavirus disease (COVID-19) toll reached 27 in Tamil Nadu, 26 in Telengana, while Karantaka has reported 21 deaths.

Punjab has registered 19 fatalities so far, while the pathogen has claimed eight lives in Jammu and Kashmir, four in Kerala. Jharkhand and Haryana have recorded three deaths each.

The sharpest jump in fatalities and the positive cases comes just a day after the Centre claimed the current doubling rate for COVID-19 cases has improved to 11 days as against 3.4 days before the lockdown was imposed, while the case fatality has been recorded at 3.2 per cent,

Addressing a press briefing, Health Ministry Joint Secretary Lav Agarwal said the doubling rate of COVID 19 cases was found to be between 11-20 days in Delhi, UP, Jammu and Kashmir, Orissa, Rajasthan, Tamil Nadu and Punjab.

Doubling rate between 20-40 days has been seen in Karnataka, Ladakh, Haryana, Uttarakhand and Kerala, he added.

Meanwhile, the United States recorded more than 2,000 coronavirus deaths in 24 hours for the third day running, according to the latest real-time tally Thursday reported by Johns Hopkins University.

The country -- hardest hit by the pandemic in terms of the number of fatalities -- recorded 2,053 deaths on Thursday, after 2,502 deaths on Wednesday and 2,207 on Tuesday.

At least 62,906 people have now died in the United States, according to the Baltimore-based university.