Described as one of the most advanced anti-tank weapons in the world by the defence ministry, the missiles were test-fired at Rajasthan's Pokhran deserts 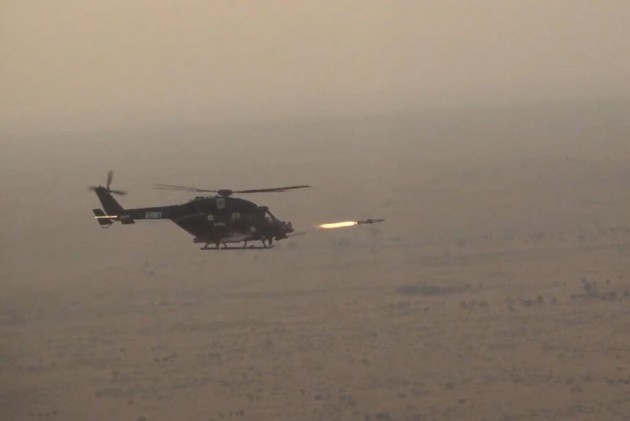 The defence ministry said that these missiles are one of the most advanced anti-tank weapons in the world.

The missiles were test-fired at Pokhran deserts in Rajasthan.

Awesome clip of India’s own anti-tank guided missile HELINA in its final round of successful tests. The weapon system stands cleared to arm the Army’s attack helicopters. pic.twitter.com/XFuWW1AoFv

"The system has the all-weather day-and-night capability and can defeat battle tanks with conventional armour as well as with explosive reactive armour. It is one of the most advanced anti-tank weapons in the world," the ministry said.

It said five missions were carried out for evaluating the capabilities of the missiles in minimum and maximum range.

"The missiles were fired in hover and max forward flight against realistic static and moving targets. Some missions were carried out with warheads against derelict tanks. A mission was carried out against a moving target from a forward flying helicopter," the ministry said in a statement.

The 'Helina' and 'Dhruvastra' are third-generation anti-tank guided missiles that can engage targets in both,  direct hit mode as well as top attack mode.

The ministry said the joint user trials of Helina (the Army version) and Dhruvastra (IAF version) have been carried out from Advanced Light Helicopter (ALH) platform.

The missile systems have been designed and developed indigenously by the Defence Research and Development Organisation (DRDO).

Defence Minister Rajnath Singh congratulated DRDO, the Army and the Indian Air Force on the successful conduct of the user trials.