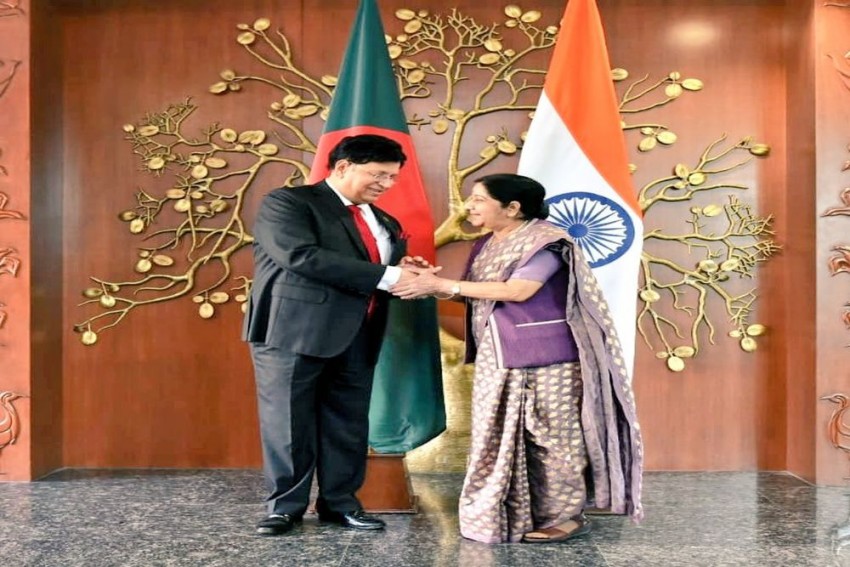 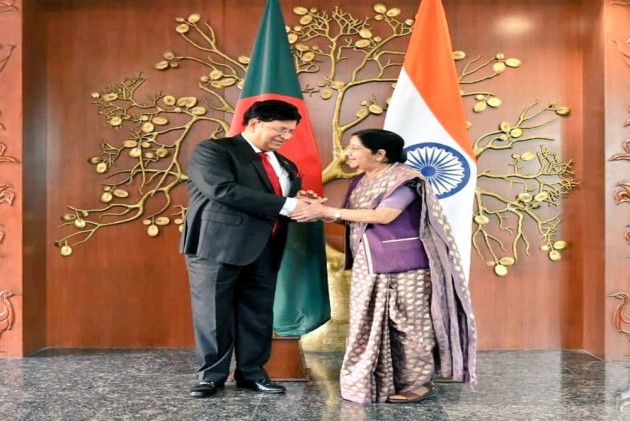 According to Bangladeshi newspaper The Daily Star, the Indian Minister said this after Momen requested for early resolution of the issue during the 5th meeting of the Joint Consultative Commission (JCC) between Bangladesh and India held at New Delhi's Jawaharlal Nehru Bhavan.

A press release issued by the Bangladesh Foreign Ministry in Dhaka said Momen also sought India's cooperation in ensuring early repatriation of the hundreds of thousands of Rohingya refugees, who fled Myanmar after a brutal military crackdown in 2017.

Sushma appreciated the humanitarian gesture of Bangladesh in supporting the large number of displaced people and assured Momen of India's continued support for safe, speedy and sustainable return of the refugees to Myanmar, according to a press release of the JCC in New Delhi.

Momen conveyed Bangladesh's gratitude for the humanitarian assistance provided by India since September 2017 to help meet the needs of the refugees.

The two ministers witnessed the signing of four MoUs between India's National Centre for Good Governance and Bangladesh's Ministry of Public Administration regarding the mid-career training of 1,800 Bangladeshi civil servants in India, cooperation between India's Medicinal Plant Board and Bangladesh's health department, Bangladesh's Anti-corruption Commission and the Central Bureau of Investigation of India, and Hiranandani Group of India and Economic Zones Authority of Bangladesh.

They expressed satisfaction that the countries are working closer than ever in sectors, ranging from security and border management to mutually-beneficial trade and investment flows, power and energy, development partnership, transport connectivity, culture and people-to-people contacts.

They welcomed the fact that the relationship was now broadening to include blue economy, cyber security, outer space, nuclear energy, IT and electronics.

The two ministers tasked their officials to develop a forward looking roadmap for bilateral cooperation to make the partnership irreversible. In particular, they desired that partnership-building efforts should be enhanced in a manner commensurate with commemoration of the 50th anniversary of Bangladesh's liberation.

Sushma appreciated that Momen decided to make India the destination of his first visit abroad as foreign minister.

In her opening remarks, Sushma underscored that trust and partnership are the bedrock of understanding between India and Bangladesh. She highlighted that both the countries are two of the fastest growing economies in the world and India stands in full support of Prime Minister Sheikh Hasina's development agenda.

So far, 1,500 Bangladeshi civil servants have already been trained in India after the signing of an MoU five years ago.

Under the new deal, 1,800 officials will be trained at India's National Centre for Good Governance over the next six years.

Sharing of waters of the Teesta river, which originates in the Himalayas and flows through Sikkim and West Bengal to merge with the Brahmaputra in Assam and (Jamuna in Bangladesh), has remained a contentious issue between the two friendly neighbours, India and Bangladesh. The river covers nearly the entire floodplains of Sikkim, while draining 2,800 sq km of Bangladesh, and governs the lives of hundreds of thousands of people. For West Bengal, Teesta is considered the lifeline of half-a-dozen districts in North Bengal. Bangladesh has sought “equitable” distribution of Teesta waters from India, on the lines of the Ganga Water Treaty of 1996.

In 2011, during former Prime Minister Manmohan Singh’s visit to Bangladesh, the two nations were set to sign a water-sharing pact on the Teesta, but at that time West Bengal Chief Minister Mamata Banerjee objected to the formula agreed upon. According to the formula, India would get 42.5% and Bangladesh 37.5% of the water during the lean season. To Banerjee, this was against the interests of her state.