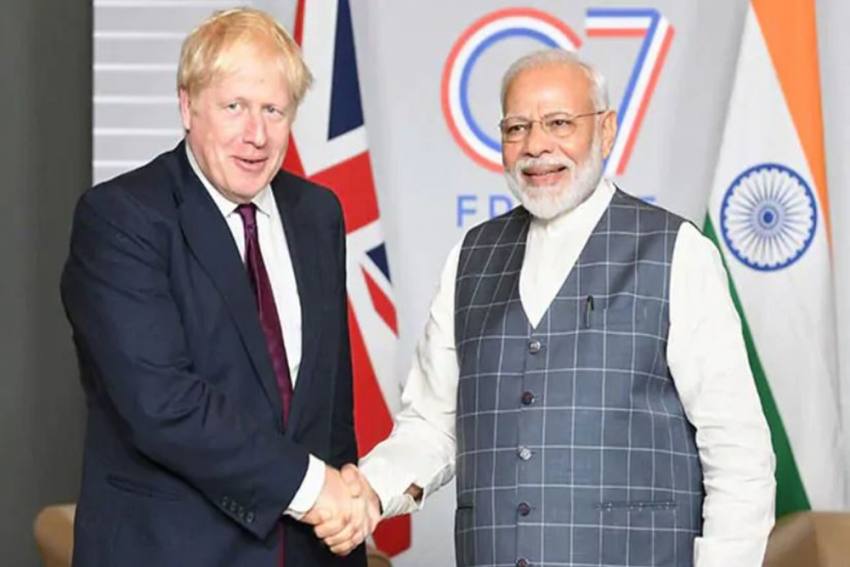 During a virtual summit, Prime Minister Narendra Modi and UK Prime Minister Boris Johnson held a wide-ranging discussion on important global, regional and bilateral issues, including cooperation in areas of defence, security and healthcare as also extradition of Indian fugitives --Vijay Mallya and Nirav Modi --who are currently in the UK.

The two sides inked nine pacts providing for expansion of cooperation in an array of areas including migration and mobility, digital and technology, telecommunications, energy and medicines, besides agreeing to boost collaboration in dealing with climate change through a new partnership on renewables and power.

Is China Sending Out Mixed Signals To India?

Briefing reporters on the summit, the External Affairs Ministry said the issue of extradition of Mallya and Modi figured in the talks, and Prime Minister Narendra Modi asserted that economic offenders should be sent back to India at the earliest to face trial.

Joint Secretary in the Europe West division in the ministry Sandeep Chakravorty said the 10-year roadmap will pave the way for a deeper and stronger bilateral engagement in the key areas of people-to-people contacts, trade and economy, defence and security, climate action and health.

Both Modi and Johnson condemned in the strongest terms terrorism in all its forms and all those who encourage, support and finance terrorism or provide sanctuary to terrorists and terror groups.

"They agreed to continue cooperation through the joint working group on counter-terrorism, including on information and intelligence sharing on terror networks and to share experiences on dealing with the growing phenomenon of extremism and radicalisation," a joint statement on the talks said.

The two prime ministers launched an 'Enhanced Trade Partnership' (ETP) to unleash the trade potential between the fifth and sixth largest economies of the world and by setting an ambitious target of more than doubling bilateral trade by 2030.

As part of the ETP, India and the UK agreed on a roadmap to negotiate a comprehensive and balanced FTA, including consideration of an interim trade agreement for delivering early gains, the MEA said in a statement, adding the ETP will generate several thousands of direct and indirect jobs in both the countries.

The partnership on migration and mobility will provide for enhanced employment opportunities for around 3,000 Indian professionals annually, Chakravorty said, indicating that those staying illegally may have to leave Britain.

He said India is against illegal migration as it "prejudices legal migration" and that Indian nationals who are undocumented, or are in distress abroad and not being given nationality or residence permits, have to be taken back.

"Had a productive Virtual Summit with my friend UK PM @BorisJohnson. We adopted an ambitious Roadmap 2030 for elevating India-UK ties to a Comprehensive Strategic Partnership," Modi tweeted.

On his part, Johnson tweeted "Today @NarendraModi and I spoke about how we can overcome the pandemic and strengthen the ties between our two countries.

We agreed an ambitious plan to bring our economies and people closer together – the beginning of a new era in the UK-India relationship."

On vaccine cooperation, Chakravorty said Johnson did inform Modi that Serum Institute of India (SII) is investing in the UK and it will be manufacturing vaccines in that country.

"The successful vaccine partnership through the Oxford-AstraZaneca-SII collaboration was highlighted. They agreed to expand partnership on vaccines, therapeutics and diagnostics on COVID19 and beyond through joint research including on nasal vaccines, regulatory and clinical trial cooperation," he said.

Chakravorty said India and UK also agreed to substantially strengthen their defence and security engagement including in the maritime, counter-terrorism and cyberspace domains.

"As part of the British tilt to Indo-Pacific, the UK has announced the deployment of Carrier Strike Group in the Indo-Pacific Region. India has agreed to conduct joint exercises with the CSG later this year and also launch a new maritime dialogue," he said.

The joint statement said the two sides agreed that there is a promising new era ahead for India-UK collaboration on key military technologies including combat aircraft, maritime propulsion system and complex weapons and deliver the next generation of defence and security capabilities through co-development and co-production.

On trade cooperation, Chakravorty said as part of the confidence building measures, the two sides agreed on an early market access package.

Under this package, the UK will open up the fisheries sector for more Indian players, facilitate more opportunities for nurses, recognise Indian seafarers certificates and also enter into a joint dialogue on the social security agreement.

"In return, India has agreed to UK's asks on fruits, medical devices, and mutual recognition of masters degrees and also work towards reciprocal opening of legal services. These actions are likely to generate 20-25,000 new direct and indirect jobs in India," he said.

The joint statement said the two sides also affirmed their shared vision of an open, free, inclusive and rules-based Indo-Pacific region, underpinned by respect for territorial integrity and sovereignty, rule of law, transparency, freedom of navigation and overflight in the international seas, unimpeded lawful commerce, and peaceful resolution of disputes.

It said both leaders reaffirmed their personal commitment to taking ambitious climate action in pursuit of the goals of the Paris Agreement and the United Nations Framework Convention on Climate Change (UNFCCC) in the run-up to the 26th Conference of Parties and beyond.

They agreed to work together to reach an ambitious, transparent and inclusive negotiated climate outcome at Glasgow.

"They agreed to step up India-UK collaboration on climate change and low carbon transition through a new partnership on renewables and power, including offshore wind, energy efficiency and storage and electric mobility, and to explore joint work on green hydrogen," it said.

On the overall outcome, Chakravorty said though it was a virtual Summit, the talks set a new milestone, and in many ways, has opened a new chapter in bilateral relations in terms of substance and outcomes.

According to a statement from Johnson's office,"more than 6,500 new jobs will be created around the UK thanks to the one billion pounds of new UK-India trade and investment announced by the Prime Minister today."

The package contains over 533 million pounds of new Indian investment into the UK, which is expected to create more than 6,000 jobs in vital and growing sectors such as health and technology, Downing Street said.

This includes a GBP 240 million investment by the Serum Institute of India (SII) in the UK into its vaccine business and a new sales office in the country, expected to generate new business worth over USD 1 billion, it added.