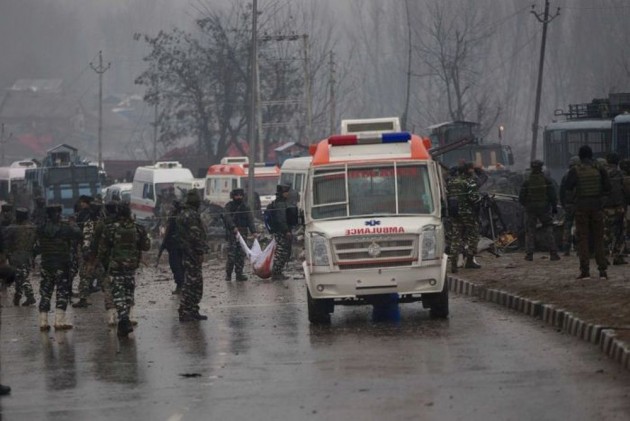 He termed the slain security personnel were "exceptional individuals" who devoted their lives to serving and protecting the nation.

"Tributes to the brave martyrs who lost their lives in the gruesome Pulwama attack last year. They were exceptional individuals who devoted their lives to serving and protecting our nation. India will never forget their martyrdom," Modi tweeted.

Union Home Minister Amit Shah also on Friday paid his homage to the CRPF personnel who were killed in a suicde blast in Jammu and Kashmuir's Pulwama last year.

"I pay homage to the martyrs of Pulwama attack. India will forever be grateful of our bravehearts and their families who made supreme sacrifice for the sovereignty and integrity of our motherland," tweeted Amit Shah.

On February 14 last year, a convoy of vehicles carrying security personnel on the Jammu-Srinagar National Highway was attacked by a vehicle-borne suicide bomber at Lethpora in Pulwama district of Jammu and Kashmir. Forty Central Reserve Police Force (CRPF) personnel were killed in the attack.

It was around 3:00 pm on this day last year when a Jaish-e-Mohammad (JeM) militant rammed a vehicle laden with explosives into the Central Reserve Police Force (CPRF) convoy on Srinagar-Jammu National Highway.

Around 40 CRPF personnel were killed and several injured.

Tensions flared up between India and Pakistan after the convoy of 78 buses, in which around 2500 CRPF personnel were traveling from Jammu to Srinagar, came under attack.

Nationwide protests erupted against the attack and leaders across the party lines and civil society condemned the attack and called for an appropriate response.

Meanwhile, a martyr's column dedicated to the memory of the jawans who laid down their lives in the line of duty will be inaugurated at the solemn function in Pulwama.