Indian Democracy Passing Through Its Most Difficult Phase: Sonia Gandhi

Congress chief Sonia Gandhi attacked the BJP government over the recently passed farm laws, economic slowdown, atrocities against Dalits and its handling of the COVID-19 pandemic. 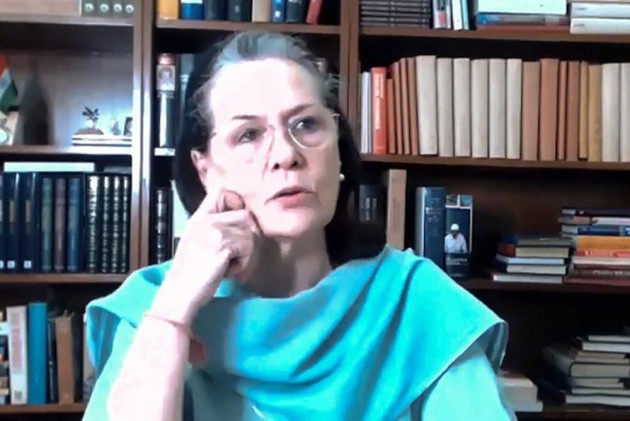 Congress chief Sonia Gandhi on Sunday claimed that Indian democracy is passing through its "most difficult phase,” as she chaired a meeting of AICC general secretaries and state in-charges. Sonia Gandhi launched a scathing attack on the government over the three farm laws, the handling of the COVID-19 pandemic, economic slowdown and alleged atrocities against Dalits.

Hitting out at the government over the recently passed farm laws, she said the BJP-led dispensation has attacked the very foundation of India's resilient agrarian economy by bringing in "three anti-agriculture black laws.”

"A conspiracy has been hatched to defeat the gains of the green revolution. Lives and livelihoods of crores of farm labourers, leasehold farmers, small and marginal farmers, toiling labourers and small shopkeepers are under attack. It is our solemn duty to join hands to defeat this sinister conspiracy," Sonia Gandhi said.

She also alleged that the country was being ruled by a government which was systematically handing over the rights of citizens to a handful of crony capitalists. Gandhi also claimed that the country’s Constitution and democratic traditions are under attack.

Talking about the handling of the coronavirus pandemic by the BJP government, the Congress chief said that the country was pushed into the "abyss" of coronavirus pandemic by "sheer ineptitude" and "mismanagement" of the Modi government. "All this happened as we witnessed the biggest unplanned and cruel migration of crores of migrant labourers as the government remained a mute spectator to their miseries,” she said. "The stark truth is that a prime minister who promised to defeat corona within 21 days has abdicated his and his government's responsibility towards the citizens," she added.

Gandhi claimed the government has simultaneously "demolished" the economy, built painstakingly by the hard work of fellow Indians and the vision of successive Congress governments. "Never has the country witnessed such a free-fall in GDP as also all other economic indices," the Congress president said.

Alleging that atrocities against Dalits have reached a "new zenith", she said that instead of honouring the law and granting adequate protection to India's daughters, BJP governments are siding with criminals.

After the meeting, Congress general secretary in-charge (organisation) K C Venugopal said the party has decided to launch a series of programmes against the "anti-farmer, anti-women, anti-poor and anti-people" policies of the BJP-led government at the Centre.

This was the first meeting of general secretaries and state in-charges, chaired by Sonia Gandhi after a major organisational reshuffle last month.

"In line with the concerted opposition to the anti-farmer legislations and our committed fight for justice for the rape victim in Hathras, it has been decided to observe 31st October, i.e. Birth Anniversary of Sardar Vallabh Bhai Patel and martyrdom day of Indira Gandhi as Kisan Adhikar Diwas," a party statement said. As part of the Diwas, the Congress will hold Satyagraha and Upwas (fasting) in every district headquarter between 10 AM to 4 PM against the recently passed farm laws.

On November 5, the party will observe Mahila and Dalit Utpidan Virodhi Divas (Stop Atrocities on Women & Dalits Day) as part of which state level dharnas will be held at every state headquarters between 10 AM to 2 PM. The party will highlight the repeated atrocities across the country against the Dailts, particularly against the Hathras victim and her family, Venugopal said.