A large number of people, dressed in traditional Indian clothes and wearing masks, joined the celebration. 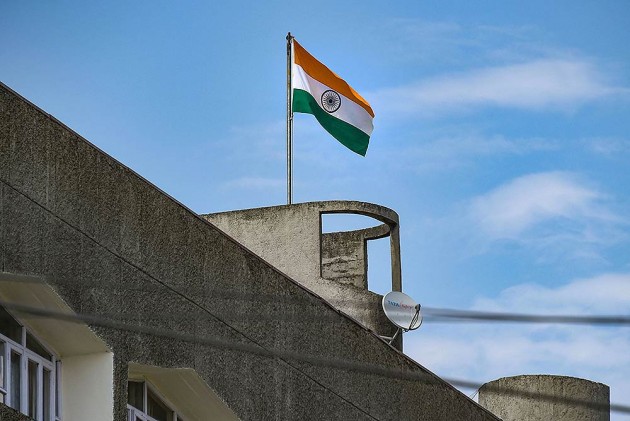 For the first time, the tricolour was hoisted at the iconic Times Square in New York on Saturday to celebrate India's 74th Independence Day.

India’s Consul General in New York, Randhir Jaiswal hoisted the Indian flag during a special commemoration of the Independence Day at Times Square, organised by the Federation of Indian Associations (FIA), the leading umbrella diaspora organisation in the US.

Addressing the gathering, Jaiswal said Prime Minister Narendra Modi has outlined India's way forward and the aspirations to build a new India, and “we are committed to taking our country forward on the basis of those aspirations.”

He lauded the FIA for organising the “historic event” when the Indian flag was unfurled for the first time in Times Square.

Vaidya said with the unfurling of the tricolour at Times Square, history has been created.

A large number of people, dressed in traditional Indian clothes and wearing masks, joined the celebration.

The crowd erupted in huge cheers and applause as the Indian tricolour was hoisted in the heart of Times Square, alongside the American flag, commenting that it was indeed a proud and historic moment for all.

Former FIA Presidents Alok Kumar and Srujal Parikh said it was a historic moment for the Indian community that the tricolour was unfurled for the first time in Times Square.

“It is indeed a proud moment for all of us,” they said.

The Federation of Indian Associations (FIA) of the tri-state area of New York, New Jersey and Connecticut has said the Indian Independence Day celebrations this year will include the flag-hoisting ceremony at Times Square and the annual tradition of illuminating the Empire State Building in hues of the tricolour - orange, white and green.

"The Times Square flag hoisting ceremony is a testament to the Indian American community’s growing patriotism and is a fitting tribute to FIA which is celebrating its golden jubilee year,” the FIA has said.

Established in 1970, the FIA is among the largest umbrella diaspora organisations.

Top US political leaders, lawmakers as well as prominent members of the Indian-American community and celebrities from India have participated in the annual parade that draws a crowd of thousands in the heart of Manhattan each year.

This year however the parade will not be held due to the COVID-19 pandemic.