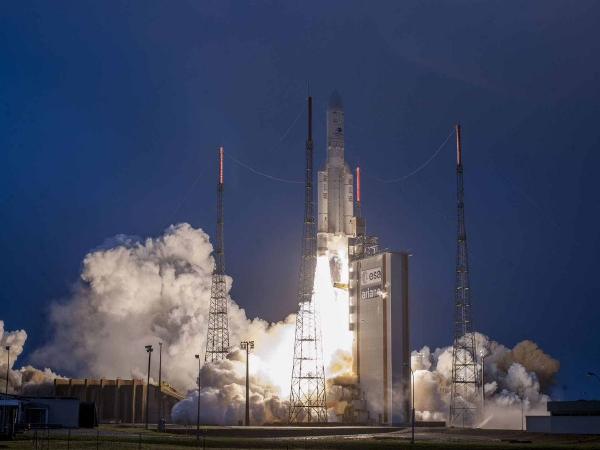 According to Indian Space Research Organisation (ISRO), the telecommunication satellite, GSAT-31 was successfully launched on February 06, 2019 from Kourou launch base, French Guiana by Ariane-5.

The 2,535-kg GSAT-31 would augment the Ku-band transponder capacity in geostationary orbit.

According to ISRO, GSAT-31, with a mission life of 15 years, will be used for supporting VSAT networks, television uplinks, digital satellite news gathering, DTH television services, cellular back haul connectivity and more.

The GSAT-31 will provide continuity to operational services on some of the in-orbit satellites, ISRO said.

The two Ku-band beacon downlink signals are transmitted by the satellite for ground tracking purpose, it said.

According to Arianespace, it opened its 2019 mission activity by successfully orbiting a pair of telecommunications spacecraft - Saudi Geostationary Satellite 1/Hellas Sat 4 (HS-4/SGS-1) and GSAT-31 with Ariane 5 rocket.

Arianespace CEO Stéphane IsraAl confirmed the success in post-launch comments from the spaceport's control room. "For the first Ariane 5 launch of the year, our heavyweight vehicle has once more performed flawlessly," he was quoted as saying in a statement.

IsraAl said that GSAT-31 was the 23rd ISRO satellite orbited by Arianespace and Ariane-series launchers, tracing the relationship back to India's APPLE small experimental communications spacecraft, lofted in 1981 by an Ariane 1 version.

He added: "Arianespace is honoured ISRO has entrusted Ariane 5 for two launches back-to-back, with the last Ariane 5 of 2018 launching GSAT-11, and today the first one of the year 2019, which orbited GSAT-31!"

With today's success, Arianespace kicks off a busy launch schedule in 2019 -- which targets up to 12 missions from the Spaceport with the heavyweight Ariane 5, medium-lift Soyuz and lightweight Vega.