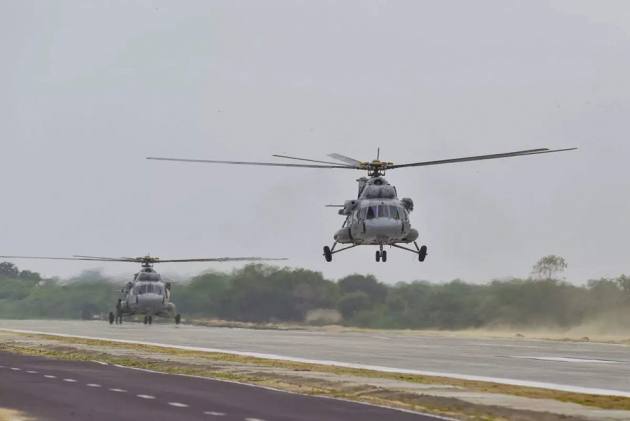 Here comes #SU30 Mki at National Highway of #Barmer.@NHAI_Official has constructed each & every part of the infrastructure in close coordination with @IAF_MCC .The airstrip in the Barmer dis would be the first such facility on a national highway. pic.twitter.com/i60xXMwlqq

In his speech, the defence minister said that a total of 20 emergency landing strips, similar to the one in Barmer, are being developed across the country right now.

An Emergency Landing Facility (ELF) for the Indian Air Force (IAF) at Satta-Gandhav stretch on NH-925A near Barmer, Rajasthan was inaugurated today. This is for the first time that a National Highway has been used for emergency landing of aircraft of Indian Air Force. pic.twitter.com/KNzHQQmTlB

"Many helipads are also being created with the help of the Union Roads Ministry. This is an important step to strengthen our security infrastructure," he added.

An-32 military transport aircraft and Mi-17v5 helicopter of the IAF also landed at the ELF, showing its complete operational readiness to act as an auxiliary military airbase.

There was this thinking that if much is spent on defence, then development in the country would be affected, he said.

"But today, seeing an emergency landing strip on a national highway, I can safely say that defence and development can go hand in hand," Singh mentioned.

The National Highways Authority of India (NHAI) has developed the 3-km section of Satta-Gandhav stretch of NH-925 as an ELF for the IAF.

Singh said, "By creating a strip so near the international border, we have given a message that we will stand up for unity, diversity and sovereignty of our country at whatever the cost."

Such creation of an emergency landing strip creates immense sense of confidence in the Indian psyche, he said.

This emergency landing strip will be helpful not only during a war but also during the times of natural calamities, Singh said, adding that a natural calamity is no less than any war.

In October 2017, fighter jets and transport planes of the IAF had conducted mock landings on the Lucknow-Agra Expressway to show that such highways can be used by the IAF planes for landing in case of an emergency.

The Lucknow-Agra Expressway, which is not a national highway, comes under the Uttar Pradesh government.

The emergency landing strip, which was inaugurated on Thursday, is part of newly developed two-lane paved shoulder of Gagariya-Bakhasar and Satta-Gandhav section having total length of 196.97 km and costing Rs 765.52 crore under the Bharatmala Pariyojana.

This highway project will improve connectivity between villages of Barmer and Jalore districts located on the international border.

Apart from the emergency landing strip, three helipads (size 100x30 metres each) have been constructed in Kundanpura, Singhania and Bakhasar villages under this project, according to the requirements of the IAF and the Indian Army.

The ELF and three helipads have been developed so as to strengthen the security network on the western international border of the country.

The ELF was constructed in 19 months. The work commenced in July 2019 and was completed in January 2021. It was carried out by GHV India Pvt Ltd under the supervision of the IAF and the NHAI.