'We must be proud of our whole ecological system,' Javadekar said during the Question Hour in the Upper House. 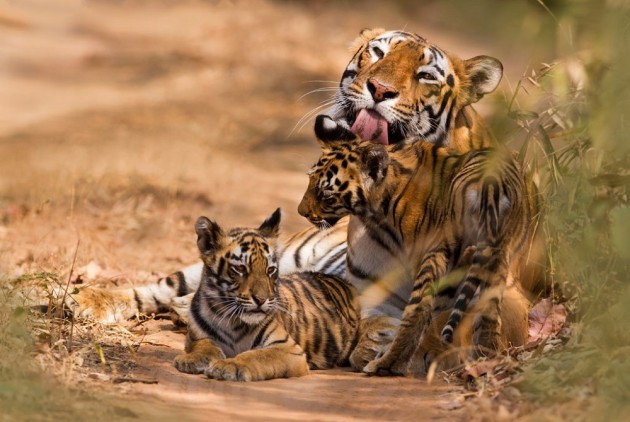 Environment, Forest and Climate Change Minister Prakash Javadekar on Monday said in the Rajya Sabha that tiger population in the country has increased by 750 in the last four years to 2,976.

Earlier, the country's tiger count was 2,226, he said during the Question Hour in the Upper House.

"Now the tiger count is 2,976. We must be proud of our whole ecological system. Tigers have increased by 750 in last four years ," Javadekar said in reply to a supplementary question.

He said lions, tigers, elephants and rhinos are India's assets and if reports of any deaths from viruses surface, special investigations are conducted to ascertain facts.

In reply to another supplementary question, the Minister said the country's Northeast has a peculiar problem of Jhum cultivation but has forest cover of over 75 per cent in all states.

Jhum cultivation is the process of growing crops by first clearing the land of trees and vegetation and burning them thereafter.

About the decline of the forest cover in certain areas there, he said there will be a new survey of 2019-20 by the end of this month.

The minister said that while a meeting of forest officials of the Northeast was convened, Himachal Pradesh has also framed an ambitious five-year plan to protect its forests.

Javadekar said the country's geographical area of forest cover has increased by 17,374 sq km between assessments of 2007 and 2017.

"However, within the above ten year period, forest cover increased by 6,788 square km between assessments 2015 and 2017 itself," he said.

The top three states which have increased the forest cover include West Bengal, undivided Andhra Pradesh and Kerala.

He said the total forest cover of the country, as per the current assessment, is 7.08 lakh sq km which is 21.54 per cent of the geographical area.

The tree cover of the country is estimated to be 93.81 sq km which is 2.85 per cent of the geogrpaphical area, he said.