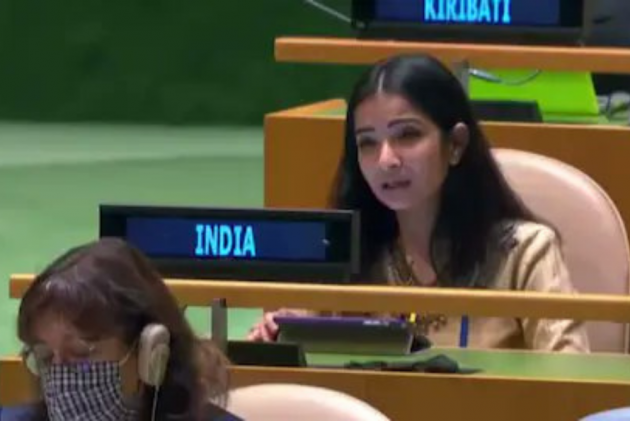 India fielded one of its youngest diplomats Sneha Dubey to counter Pakistan Prime Minister Imran Khan's rant on Kashmir at the UN General Assembly on Friday.

First Secretary Dubey gave a blistering retort to Khan in the UN General Assembly as she delivered India's strong Right of Reply from the UNGA hall.

"We exercise our Right of Reply to one more attempt by the leader of Pakistan to tarnish the image of this august Forum by bringing in matters internal to my country, and going so far as to spew falsehoods on the world stage," Dubey said in the UNGA.

"While such statements deserve our collective contempt and sympathy for the mindset of the person who utters falsehood repeatedly, I am taking the floor to set the record straight,” she said in her video address to the 76th session of the UNGA.

Dubey, a 2012 batch IFS officer, has an MA and MPhil from Jawaharlal Nehru University and was Under Secretary (T) Latin America and Caribbean in the Ministry of External Affairs from December 2013 to August 2014. She was then Third Secretary in the Embassy of India in Madrid, according to her LinkedIn profile.

"Excellent rebuttal by this brilliant, young, energetic diplomat of this great nation," a Twitter user said while another commented "A brave diplomat of India.. Great job."

Another post on Twitter said, "A befitting reply by @SnehaDube Full of confidence and facts. Well done. Keep it up" while many others applauded India's "Nari Shakti (women power)".

It was during the tenure of then Indian envoy at the UN Ambassador Syed Akbaruddin that the trend began of India fielding young diplomats to deliver the Right of Reply to Pakistani leaders who consistently rake up the Kashmir issue and other internal matters of India in their addresses to the UN General Assembly and other forums of the world organisation.

In 2019, Khan had delivered his maiden speech at the UN General Debate and in his almost 50-minute address, devoted half of his time to India and Kashmir, drumming up hysteria over nuclear war. (With PTI inputs)