INLD, In Its Worst-Ever Show In Haryana, Ends Up With Single Seat

Barring one, 80 candidates of the party had to bite the dust 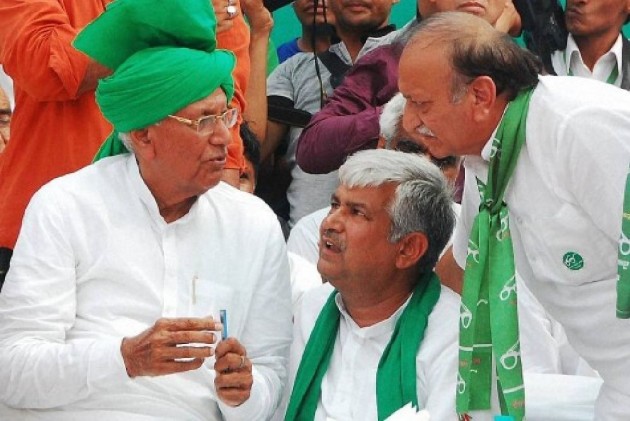 The results of the Haryana Assembly polls dealt a severe blow to the Indian National Lok Dal (INLD), founded by former deputy prime minister Devi Lal, which slumped to its worst performance ever on Thursday.

Barring senior leader Abhay Singh Chautala retaining his Ellenabad seat in Sirsa district, over 80 candidates of the party had to bite the dust.

Days before the October 21 polls, the INLD had stitched up an alliance with the Shiromani Akali Dal (SAD), but failed to win any of the three seats it contested.

The party registered its worst-ever poll performance and its vote share dropped to 2.45 per cent from 24.11 per cent in 2014.

The INLD's graph had been on the decline after it split in 2018, following a feud in the Chautala clan.

While Ajay is serving a jail term, along with his father, in connection with a teachers recruitment scam that took place in the state when the INLD was in power, the Jannayak Janata Party (JJP) was floated by Ajay's son Dushyant Chautala after the split.

A year ago, the feud saw Ajay Chautala and his sons Dushyant and Digvijay being expelled from the Haryana-based party by the senior Chautala, who threw his weight behind his younger son, Abhay.

The trigger was an INLD rally in Gohana in October, when the supporters of the two younger Chautalas hooted at their uncle, Abhay.

The split came at a time when the INLD had entered into an alliance with the Bahujan Samaj Party (BSP) and was hoping to return to power in Haryana after a 14-year hiatus. The BSP later walked away from the alliance.

After the split, the first major jolt to the INLD came when it lost the Jind bypoll earlier this year. It had won the seat in the 2014 Assembly election, but lost it to the ruling Bharatiya Janata Party (BJP) in the bypoll, which was necessitated by the death of the INLD legislator.

Then came the Lok Sabha polls in May, where the party was decimated. It lost in all the seats and its vote share stood at just 1.89 per cent.

Previously in the Assembly polls, the INLD, which was in power at that time, had performed poorly when it won just nine seats in 2005. The Congress had stormed to power in Haryana in 2005, winning 67 of the 90 seats.

However, in the 2009 Assembly polls, the INLD won 31 seats and five years later, 19, making it the principal opposition party. But that status was lost when a majority of its legislators switched over to rival camps, including the BJP, the Congress and the JJP, before the Lok Sabha and Assembly polls this year.

The final blow was dealt when the former state chief of the INLD, Ashok Arora, and senior leader Rampal Majra snapped their long association with the party, barely weeks before the Assembly polls, and joined the Congress and the BJP respectively.

Om Prakash Chautala and his son Abhay are the only two prominent leaders left in the INLD now.