A discipline earned while tackling Covid-19 may have saved Kerala from a wide outbreak of Nipah. Despite thin resources, the state health machinery kicked in to put checks in place. The outbreak, most probably spiraled out of bat-bitten Rambutan fruits. 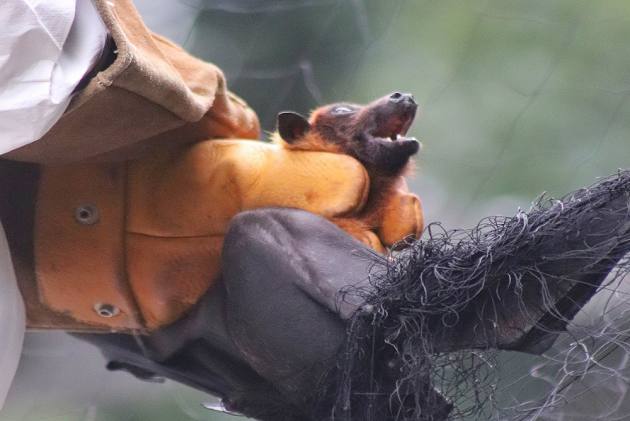 Little did Vichutti from Pazhur village of Kerala's Kozhikode district know that the rambutan fruits he picked from his tiny patch of land alongside the River Iruvazhinji would put the entire country in a panic mode.

A tree-climber by occupation, Vichutti, whose official name is Vayoli Abubakkar, was happy to see rambutan, which is otherwise a rare fruit in this area, giving yield for the first time on his tree this year. After that, he went to the riverside quite frequently, picked the fruits and gave them to his 12-year-old son Muhammad Hashim.

On the morning of Sunday, September 5, Vichutti’s village woke up to the news that Hashim died due to Nipah infection, the first such case in Kerala after the state reported and controlled the virus outbreak from the same district in May 2018 that had claimed 17 lives.

The village has now been put under a complete lockdown with police deployment on all entry points. The villagers and the health department suspect bat-bitten rambutan fruits as the primary source of the virus outbreak. Outlook visited the riverside the day Hashim died – a 20-minute walk from his residence. 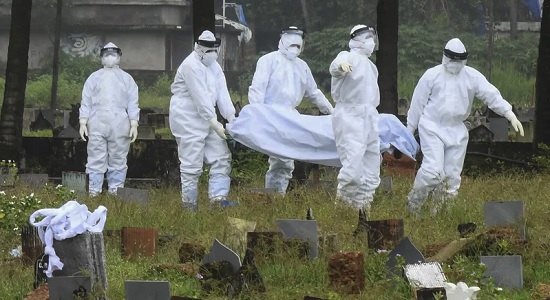 A kaccha road alongside an areca nut field takes you to the riverside where the rambutan tree stands. By evening, the ground beneath the tree is strewn with bird-bitten fruits.

“You can find a lot of bats here,” said Amjad, a neighbour, adding, “I had seen the boy’s father coming here a couple of times recently.”

On September 14, the Kerala government eased restrictions in Pazhur’s neighbouring villages as no new cases were reported even after the incubation period of 14 days and the samples of the close contacts of the deceased child tested negative.

Restrictions in Pazhur, which is Ward-9 in Chathamangalam panchayat, however, still continues.

“Ward 9 in the Chathamangalam panchayat will continue to be a containment zone. The decision was taken as per the direction of the medical board and the expert committee," state health minister Veena George said in a release.

Pazhur has 625 families. The village also had 49 ‘guest workers’ (an official terminology to describe migrant workers) but all of them left for their native places since the Covid-19 outbreak, EP Valsala, the elected member representing Ward-9, told Outlook. 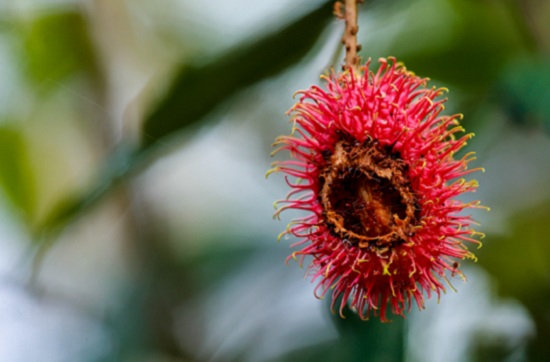 Valsala says things didn’t go out of control here while dealing with the Nipah outbreak thanks to people’s experience of Covid-19.

“People were already wearing masks and following other Covid-19 protocols, which might have helped prevent spread of Nipah as well,” she said.

Rasheed also recalled how the situation caused panic in the pre-Covid times back in 2018 when Nipah outbreak was reported in Perambra in the same district. The Kozhikode Medical College, which is always a busy place, had worn a deserted look. People, scared of infection, had avoided every public place. There was 19 confirmed infections and 17 deaths with a fatality rate of 89.4 per cent. Two earlier Nipah outbreaks were reported in India in 2007 and 2001-- both cases in West Bengal.

Speaking to Outlook, Health Minister of Kerala, Veena George acknowledged Covid-19 protocol as a factor that possibly helped in preventing spread of Nipah virus infection. However she also added that dealing with two consecutive pandemics at a time had already exhausted the health system of the state. Kerala was already reporting one of the highest spikes in Covid-19 cases in the country. 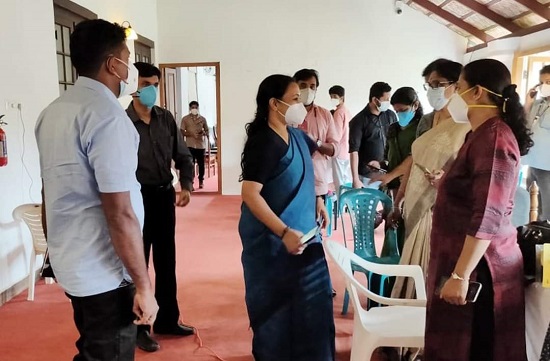 The minister said she received confirmation about the Nipah virus infection from the National Institute of Virology (NIV) in Pune, which had tested the boy’s sample, at around 10 pm on September 4. She immediately informed the matter to the Chief Minister, Pinarayi Vijayan.

“The boy’s condition was very critical at that time,” the minister said.

“Sixteen committees were formed in the meeting, an action plan was created that included contact tracing, field surveillance, psycho-social support and so on,” she said.

The minister left for Kozhikode from the state capital Thiruvananthapuram the same night at 12 am.

“We were cautious not to create panic among the people but at the same time we wanted to get done with the initial contact tracing by early morning the next day,” she said. The boy was taken to one private doctor’s clinic and four hospitals including the government medical college in Kozhikode before he finally succumbed to the virus. 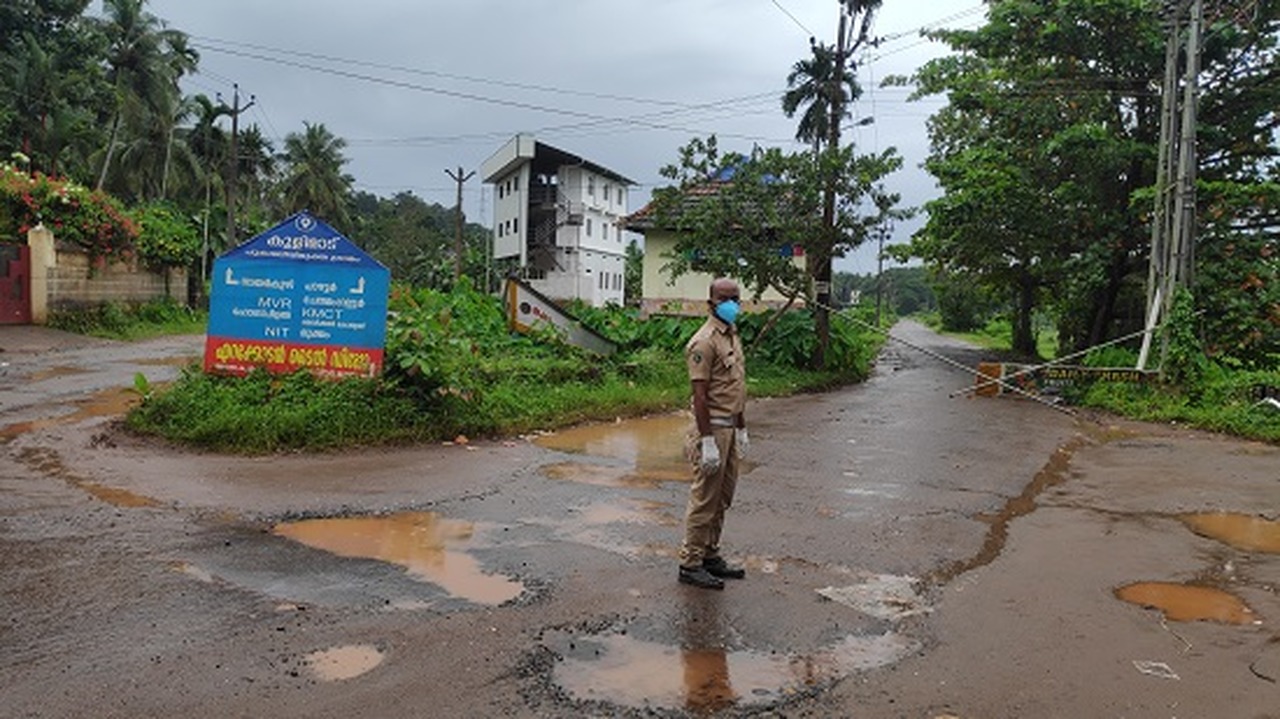 A police personnel deployed at the entry point to Pazhur

“It would have been a painful exercise to bother the boy’s parents at their moment of grief to extract information about each and every contact person. Considering that, we issued an institutional route map and traced all persons including the health workers and the drivers who had come in contact with the boy,” the minister said, adding, “The night of September 4 was crucial. We took all important decisions on that night itself.”

On the morning of September 5, a control room was opened in Kozhikode. The government declared areas within 3 kms radius of the boy’s house as containment zone. Also, Covid-19 vaccination was suspended in the district for 48 hours. The health department converted the Covid-19 pay ward in the Kozhikode medical college to a Nipah ward and an ICU was also kept ready anticipating any more cases. Treatment facility and medicine availability were ensured. Additional staffs were deployed and the health department also gave special training to health workers from doctors – of both government and private sectors – to ASHA workers in the district.

“More importantly, a Nipah lab was set up in Kozhikode medical college by special teams from Pune and Alappuzha,” Veena George said.

“There would be more symptomatic people as Covid pandemic was also prevailing. Any delay in testing samples could have caused more stress. Immediately setting up a lab was very crucial, she said. Also, mobile labs were set up for Covid testing in Nipah containment zone which enabled swab collection at home. "

“We ensured that we were fully prepared and equipped to identify new cases, prevent any further spread and to deal with new patients if any,” the minister said. 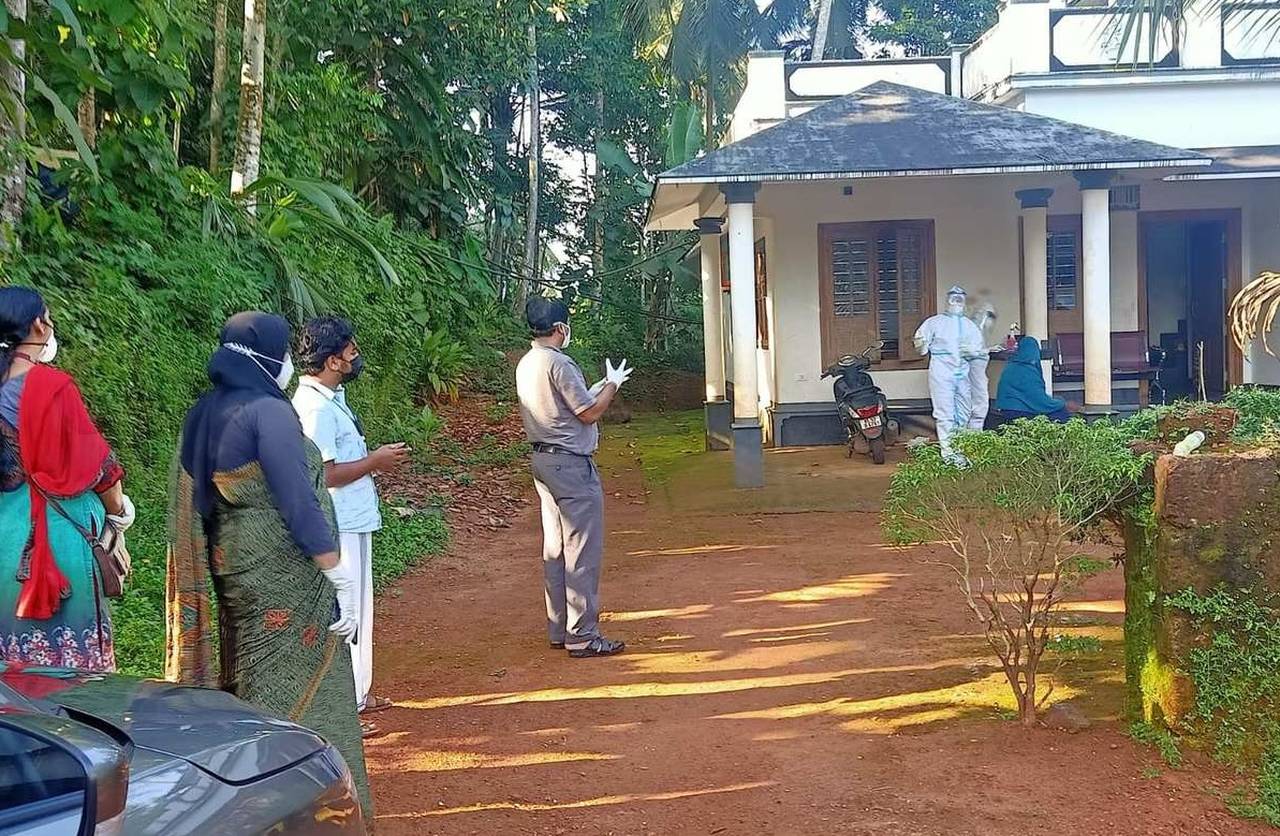 A field surveillance team in Pazhur

“Along with contact tracing, it was equally important to identify the source of infection as well,” Veena Geroge said. "The health department conducted field surveillance and house-to-house survey in the affected area. We called panchayat presidents and all-party leaders and formed volunteer groups for the survey. It was primarily intended to find unreported fever, unusual deaths and animal diseases in the past one month," she said. A central team was called for bat surveillance. They identified bat habitat across the river in the neighbouring Kodiyathur panchayat.

“Bats spread more virus when they are stressed. Hence, it was important not to scare bats,” said Veena George.

Besides rambutan, areca nuts are also suspected to have caused infection. The area has a large number of areca nut trees. The boy’s father is a coconut collector and climbs the coconut trees.

There are high chances of the boy getting infected by bat-bitten areca nuts. A goat in the boy’s house was rumoured to have died. However, it was later found that the animal was alive but had fallen ill a month ago. This goat’s samples are also sent for testing. “We are expecting those test results soon,” Veena George said.

As the state’s health machinery started rolling out on the night of September 4 itself, it took no time to reach action on the ground zero. 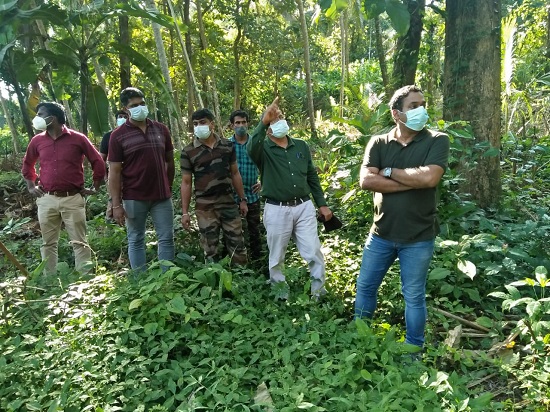 JHI Rasheed said he located the boy’s house with the help of local RRT member Anees MK on the same night at around 10:30 immediately after he got an alert from his department. Panchayat President Gafoor said the police and health officials blocked the entry points to the village the same night itself.

A microphone announcement was arranged for people’s awareness the next morning. Notices were distributed at houses for precaution.

The survey was conducted in 12,500 houses in Chathamangalam panchayat alone. The panchayat president said free food kits were distributed in ward-9 for the families of daily wagers who were hit by the sudden lockdown.  A 11-member RRT team was formed to distribute basic items to households so that families could stay indoors.

According to JHI Rasheed, the boy started suffering from fever and headache on the night of August 27. His parents gave him paracetamol tablets on 27th and 28th. On 29th morning, when he was not improving, the parents took him to a private doctor’s clinic in the neighboring area.

The doctor prescribed Azithromycin 250 mg for three days. However, he started developing throat pain, woke up at 2 am on 30th and vomited twice. The ASHA worker of the area contacted the parents and suggested to go for a Covid-19 test. 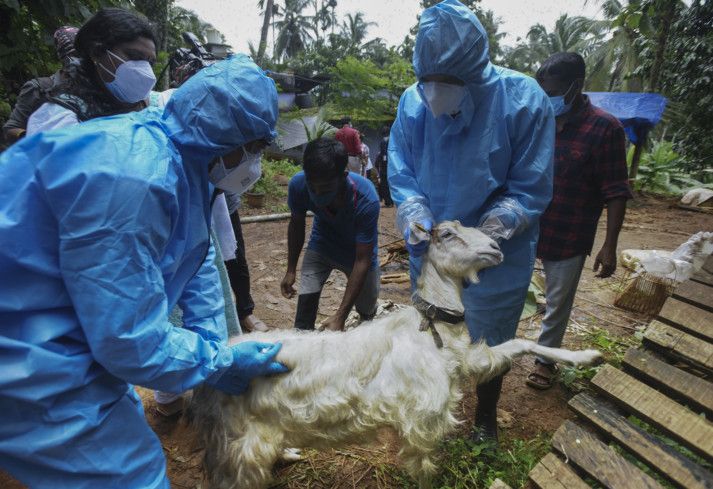 The parents observed the boy on 30th. On Tuesday, August 31, they took him by an auto rickshaw to the nearby EMS hospital in Mukkam and conducted antigen test.  In the same auto, they took him to another private hospital in the neighbouring Omassery to conduct RTPCR test.

From there, the same day, he was taken to the government medical college in Kozhikode by an ambulance. By the time, he had developed high-grade fever and fits. The boy’s mother later told local media that the boy was moved to yet another private hospital after the medical college asked the family to shift him from there citing non-availability of ICU. Hashim’s mother was reportedly feverish on the day the boy died, which had sent alarm bells.

However, the next day she said she was alright.

Asked if Pazhur was a success story or would it be too early to say so, health minister Veena George said “Things are under control after the 21 days’ incubation period. However, we should wait for another 21 days to be sure.”

The minister said the state has to be fully prepared to control Nipah outbreak in future. A BSL Level 3 lab in Kozhikode medical college will be set up soon, she said.