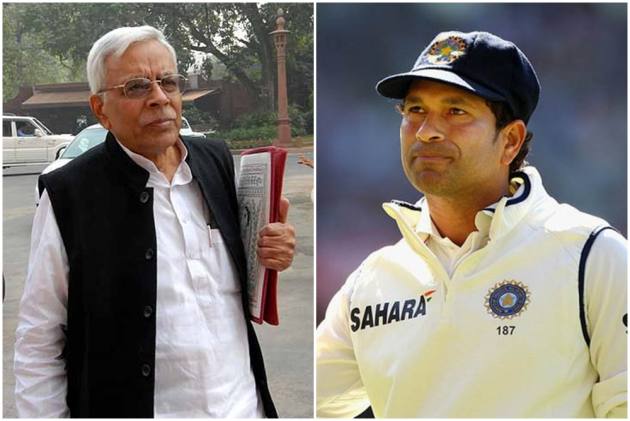 Alleging that the Union government “fielded” Sachin Tendulkar to “counter” international personalities who recently tweeted about farmers’ protest, RJD leader Shivananda Tiwari on Friday said it was an insult to have conferred the Bharat Ratna on the batting legend.

Cricketers like Tendulkar, Ravi Shastri, Virat Kohli, on Wednesday joined Bollywood superstars Akshay Kumar and Ajay Devgn to support the Centre's call on standing against "propaganda" against the Indian government and its policies after international personalities like Rihanna and Greta Thunberg extended their support towards farmer's protest.

The RJD's national vice president asked whether the Centre wants the world to turn a blind eye to the farmer's stir by "getting statements issued by people like Tendulkar".

"Indias sovereignty cannot be compromised. External forces can be spectators but not participants. Indians know India and should decide for India. Lets remain united as a nation," Tendulkar had tweeted on February 3, 2021 with hashtag #IndiaTogether  #IndiaAgainstPropaganda.

India’s sovereignty cannot be compromised. External forces can be spectators but not participants.
Indians know India and should decide for India. Let's remain united as a nation.#IndiaTogether #IndiaAgainstPropaganda

"Farmers do not know about Twitter. This Twitter politics has started recently and everyone is doing it. What do the farmers know about Greta Thunberg or Rihanna? And you have fielded Sachin Tendulkar against them," the RJD leader said.

Climate and environmental activist Greta Thunberg had come out in support of the farmers' protest at Delhi's borders against the Centre's new agri laws.

"We stand in solidarity with the #FarmersProtest in India," she had tweeted soon after singer Rihanna shared a news article highlighting the Centre's crackdown on the farmers by cutting off internet services in many regions.

"Why aren't we talking about this?! #FarmersProtest," Rihanna had tweeted.

Tiwari's remark came in for sharp criticism from the ruling BJP and its ally JD(U) which demanded an apology from him.

However, the RJD distanced itself from the remark, terming it as Tiwari's "personal opinion".

Condemning the RJD leaders statement, the BJP and the JD(U), describing it as "absurd and uncalled for".

"The RJD is free to express grievances and demand Bharat Ratna for anybody but Shivanandji doent have the right to abuse anyone who is conferred with Bharat Ratna. We seriously condemn the statement and demand that Tejashwi Yadav should come up with a clarification on his party leader," Bihar BJP spokesman Nikhil Anand said.

Echoing similar sentiments, Bihar JD(U) spokesperson Rajiv Ranjan Prasad said, "Showing respect for foreign celebrities like Greta Thunberg and Rihanna and insulting legendary cricketer Sachin Tendulkar, who is loved and admired by millions of people, can only be expected from a leader of the RJD".

If Tiwari does not apologise, RJD leader Tejashwi Prasad Yadav should take stern action against him, Prasad said.

Bihar RJD spokesman Mrityunjay Tiwary said, "It is his (Shivanand Tiwaris) personal opinion which he may have given considering the conditions and sufferings of the protesting farmers.