Equating the Budget with cricket, Paswan said it was "a sixer" and the opposition would not be able "to find the ball" until the Lok Sabha elections. 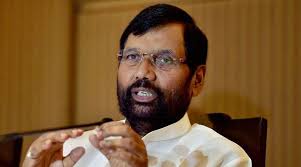 "The first surgical strike occurred on the border. Jawans fought it with bullets. Here, we will fight with ballots. People will decide that the NDA wins 400 seats. Narendra Modiji will be the Prime Minister (again)," he told reporters outside Parliament.

"Has anybody ever thought of such a big step for farmers?" he asked.

Equating the Budget with cricket, Paswan said it was "a sixer" and the opposition would not be able "to find the ball" until the Lok Sabha elections.

Reaching out to a large electorate ahead of the Lok Sabha polls, the Modi government on Friday in the interim budget announced a cash dole for small farmers, a mega pension scheme for the unorganied sector and doubled the threshold income tax exemption limit to Rs 5 lakh.

The new government, elected after general elections due by May, is expected to present a full budget in July along with the Economic Survey.

Here are the HIGHLIGHTS:

1. Within 2 years, tax assessment will be done electronically

2. IT returns processing in just 24 hours

3. Minimum 14% revenue of GST to states by Central government

6. Full rebate up to Rs 5 lakh annual income after all deductions

13. Benefit given to unsold inventory increased from one year to two years.