Remembering the solar eclipse as its lunar twin sweeps over India, a Buddhist nunnery is teaching itself to think of science while looking at a cosmic event. 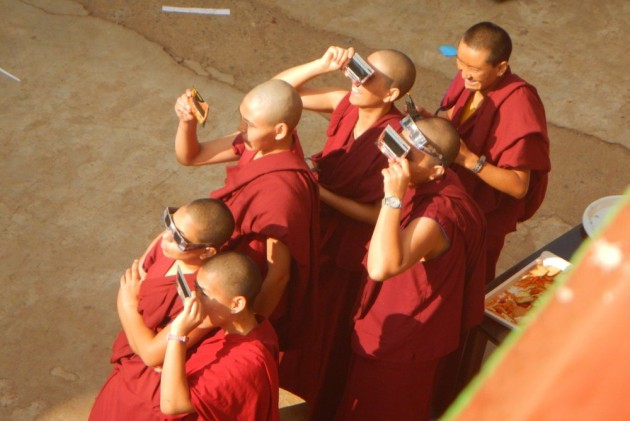 When 28-year-old Buddhist nun Paldan Zangma saw the sun appear like a ring of fire in a washed December sky at Jangchub Choeling Nunnery in the Tibetan settlement of Mundgod in Karnataka last year, she was less overawed than meditative.

“When the light dimmed, I realized the transitory nature of our existence,” says Zangma, who set foot in the Jangchub Choeling Nunnery set amid the low-lying hills and paddy fields of North Karnataka at the age of 10. “But the science behind the partial eclipse of the sun was equally important.”

Zangma and over 100 other nuns of Mundgod, armed with filters, eye-masks and shiny mirrors, assembled in the courtyard of their over three-decades-old institution last December to witness the solar eclipse as a scientific phenomenon — a clear break from their traditional thinking. Nuns at the Jangchub Choeling Nunnery in the Tibetan settlement of Mundgod in Karnataka watch the solar eclipse. Photo: Priyadarshini Sen

“In our village, our elders would tell us the devil eats up the sun. So, they encouraged us to stay indoors to protect us from evil,” says Tsering Lhanzom, an 18-year-old nun from Ladakh, who believes her exposure to science and Buddhist philosophy has broadened her mental horizons and sharpened her critical thinking skills.

“We now reflect on the interplay between science and dharma, logic and emotional intelligence. It’s a novelty for Buddhist monastics who had limited exposure to the sciences.”

Since 2000, driven by the Dalai Lama’s personal interest in science, the new discipline was introduced in the Tibetan Buddhist monasteries to bring a new approach to ancient Buddhist philosophy. Nuns at the Jangchub Choeling Nunnery in the Tibetan settlement of Mundgod in Karnataka watch the solar eclipse. Photo: Priyadarshini Sen

The interest in science caught on quickly among student nuns and monks, who began to rely on debates, seminars, exhibitions and lectures for their philosophical study topics.

Progressively, science classes were organised at the monasteries through logistical, financial and professional support from organizations such as Science Meets Dharma, Science for Monks and Nuns and the Emory-Tibet Science Initiative.

In December last year, women astronomy teachers associated with the Science for Monks and Nuns Project worked with the nuns to provide guidance, equipment and tools prior to the eclipse event.

The buzz around the festival even broke community barriers as it drew school children from surrounding areas keen to know about the astronomical event from monastics.

“The interest in science at the nunnery has grown steadily in the last few years,” says Bryce Johnson, one of the founders of Science for Monks and Nuns. “Events like the solar eclipse allow the nunnery to reach out to the community, spark conversations and break down community barriers.”

The head of the institution, Lobsang Tsultrim, says women are receptive to new learning, and science helps them keep up with dynamic study approaches across the world.

“India is the best place to study Buddhism and ancient philosophy, but science will help monastics spread this learning across the world for the benefit of all sentient beings,” said Tsultrim.

Paul Syska, a German supervisor who doubles up as a science teacher at the nunnery on his visits to India, believes science education prepares monastics for the modern world.

“Women monastics have a high spiritual consciousness, and this when combined with a modern learning system, has the potential to turn them into knowledge powerhouses,” he says. A nun at the Jangchub Choeling Nunnery in the Tibetan settlement of Mundgod in Karnataka works on a science experiment. Photo: Paul Syska

But it’s not just about expanding the science ecosystem in the Tibetan monasteries.

Syska believes scientists have as much to learn from Buddhist philosophers in order to cultivate a more mindful and empathetic approach to natural phenomena.

“It’s all about give and take,” says Mopsang Dhamchoe, a former monk from Dharamsala who has kept himself abreast of the latest developments in Tibetan monastic education.

“Scientists are helping monastics view natural phenomena like solar and lunar eclipses logically, while Buddhists are teaching them how to use the heart when making scientific observations.”

Dhamchoe says despite the science behind natural events such as the solar eclipse, their traditional beliefs and folklores can’t be wished away.

“During an eclipse, the microcosm of our bodies is affected by the macrocosmic movement of celestial bodies,” he says. “Through meditation and prayers, we can heighten our elemental energy and nullify negative actions.”

Many nuns spoke about self-imposed dietary restrictions, ritual purifications and positive thinking they continue to practice during major astronomical events to ward off misfortune and ill omens.

A nun from Spiti said, in her village, even now it’s believed both living and inanimate objects die during a solar eclipse due to abandonment of solar rays, especially if their astrological alignments are in conflict with planets involved in the eclipse and their life force is particularly weak.

“It’s hard to abandon these ideas altogether because surely science can’t explain everything,” she said. “But still, science allows us to logically analyse these events.” The Jangchub Choeling Nunnery in the Tibetan settlement of Mundgod in Karnataka. Photo: Paul Syska

During the eclipse viewing festival at the Jangchub Choeling Nunnery, the monastics were keen to use the equipment and tools at their disposal to enhance their scientific knowledge.

“Just as the Buddha said you have to learn and experience everything to end your ignorance,” said 27-year-old Tenzin Namsel from Tibet, “I saw the eclipse as an opportunity to learn something scientific, while also enhancing my karma.”

(Priyadarshini Sen is an Independent Journalist based in Delhi. She writes for various India and US-based media outlets.)