In a written complaint, Rath alleged that Singh poses a threat to his safety, reputation, life and liberty. 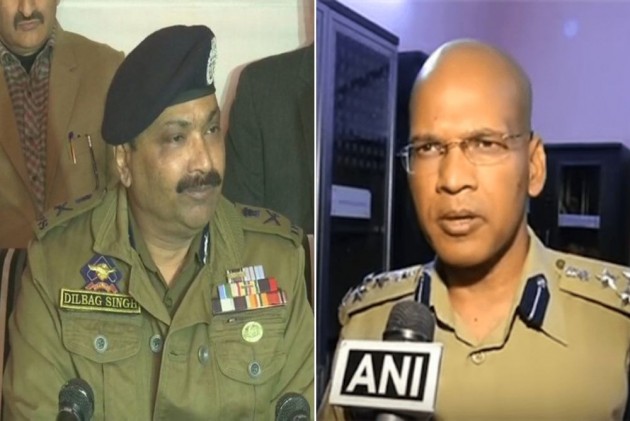 Top IPS officer Basant Kumar Rath on Thursday filed a written Police complaint against his own boss, Jammu and Kashmir Director General of Police (DGP) Dilbag Singh, alleging that the top cop poses a threat to his safety, reputation, life and liberty. Rath is presently posted as IGP Home Guards in the Union Territory.

In a written complaint to station house officer of Jammu’s Gandhi Nagar Police Station, Rath said that they should make a note of his complaint in case something untoward happens to him. “Requesting you to take note of my apprehension about my life, liberty and bald head; the reason being certain activities of Sh Dilbag Singh, IPS batch 1987 batch, presently DGP. I’m writing you to take note of my genuine apprehensions about my safety and reputation. I’m doing it as a private citizen of this country, in my personal capacity, not as a civil servant, not as a policeman,” Rath said.

“I’m not asking you to lodge a FIR against the person mentioned above. I’m just asking you to make this letter a part of the Daily Diary in your police station. Today. Now. In case something bad happens to me, you should know whose number you should dial. I expect you to acknowledge this letter. You can send me a screenshot on my WhatsAp,” the letter reads.

The written complaint was also copied to the DG. Outlook reached out to Rath for a comment but did not receive a response.

The fresh spat between the two senior officers started on Twitter on June 12 after Rath made a sarcastic comment to a Twitter user called Dilbagh Singh. The user had posted a tweet on Rath’s initiative to distribute free books to needy students across Jammu and Kashmir for the past few years.

“Hi Dilbag Singh. Can I call you Dilloo? Are you the one who owns 50 canals of land in Sarore near the dental college? Is it registered in your name?” Rath wrote in a tweet.

Singh reacted to Rath’s tweet on a WhatsApp group called ‘Kashmir Firstpost’, run by a senior journalist. “Shame on this IPS officer who has risen to become IG and is dumped again without any work, because every time he is given a responsibility, he proves to be a joker and useless. I challenge him to prove an inch of land or property or any business worth a penny in my name or my family or in anyone else’s name on my behalf. Or let’s take him to task,” Singh wrote.

The police are silent about the incident. “Don’t know why it has reached to this level. The less said the better,” said a senior police official requesting anonymity. Another officer said concerns are being raised about how screenshots of the WhatsApp group conversation started doing the rounds.

Rath is not new to controversies.  After joining as IGP, traffic in 2017, he wrote a complaint against senior IPS officer’s son and took to social media to announce it. “Friends, I got an Audi car (CH01 BK 7900) seized today. The driver was a young friend with whom I used to play lawn tennis when I was young. His father is a colleague and an IPS officer in J&K. I’m sad. And I’m happy,” he had written.