Is Rahul Gandhi’s Return As Congress President In The Works?

Congress sources say the process for bringing Rahul back as Congress president may now be accelerated though there are “obvious hurdles” that still need to be streamlined. 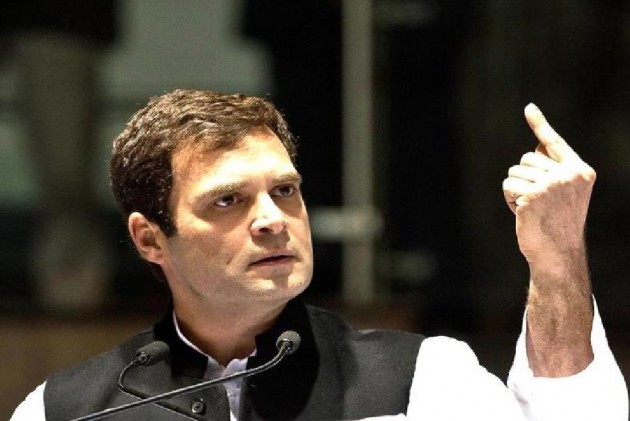 Even before Wayanad M.P Rahul Gandhi addressed the Congress party’s Bharat Bachao Rally at Delhi’s Ramlila Maidan, launching a full-frontal assault on the BJP with his ‘I am not Rahul Savarkar’ jibe, the effort to propel him back to the organisation’s front line had begun.

The plans for Saturday’s rally, which had over 30,000 party workers from across the country in attendance (Delhi Congress chief Subhash Chopra put the figure at 50,000), had been afoot for several months now. The party had initially planned it for October, and then deferred it to November, before finally deciding on December 14. All this while, Congress sources say, a section of the party leadership was constantly in touch with Rahul to ensure that he not just participates in the rally but has enough ammunition to charge at the BJP with. Rahul’s sister, Priyanka Gandhi Vadra was also convinced to share the dais at the rally and exhort party workers with an equally stinging speech against the BJP.

Ever since Rahul stepped down as Congress president in the aftermath of his party’s decimation in the Lok Sabha polls, he had limited his engagement with party workers. His outbursts against the ruling party seldom went beyond his tweets.

He had largely left the task of running the party to his mother, Sonia Gandhi, who stepped in as interim Congress chief in August. The responsibility of putting the government on the mat during Parliament sessions was left to party MPs Adhir Ranjan Chowdhury, Shashi Tharoor, Manish Tewari (in the Lok Sabha), Ghulam Nabi Azad, Anand Sharma (in the Rajya Sabha) and others.

During the recent assembly polls in Haryana and Maharashtra, Rahul had addressed a few rallies but his attacks at Narendra Modi, Amit Shah and the BJP were mostly rehashed from his speeches of the general election campaign. For the most part, Rahul was just happy playing the Wayanad M.P, making visits to his constituency in Kerala and writing letters to the chief minister or Centre pushing for various works in the area.

Party sources say the Modi government’s inability to stem a worsening economic crisis and its legislative agenda of abrogating Article 370 in Kashmir and more recently the enactment of the Citizenship Amendment Bill triggering social unrest prepared the ground for bringing Rahul back at the helm.

“The return of Sonia Gandhi as interim chief was only a temporary arrangement. Rahul’s insistence on stepping down had created a precarious situation because a non-Gandhi at the helm, as Rahul had pushed for, would have hastened defections from the party, perhaps even caused a split. Those working closely with Sonia and Rahul were very clear that he can take a break from the post, think over the narrative he wants to build against the party, but eventually must return as the leader,” a senior party functionary told Outlook.

Another party leader said that the election results in Maharashtra and Haryana too played a crucial role in convincing Rahul that he “must end his self-imposed exile from his responsibilities towards the party”.

The party’s performance in Haryana surpassed everyone’s expectations though it couldn’t form a government in the state. In Maharashtra, while the Congress didn’t register any substantial improvement in its electoral performance, the unpredictable turn of events which caused the Shiv Sena to form a coalition government with Sharad Pawar’s NCP and the Congress forced Rahul to become involved with the party’s decision-making process once again. Party general secretary K.C. Venugopal was constantly in touch with Rahul during the Maharashtra talks,” say sources.

A party veteran told Outlook that the irony in the turn of events is that “it is not so much as the churning within the Congress than the actions of the Modi government that helped Rahul change his mind.” The leader said that though Rahul’s tweets against the government on a slew of issues, including the arrest of party leaders P. Chidambaram and D.K. Shivakumar, the economic crisis, Article 370 and the CAB were meant to provoke the BJP into attacking him, “the general feeling was that Rahul was still not willing to lead from the front again.”

The party, sources said, kept the pressure going on Rahul. “There was a single-point appeal to him – don’t abandon the party even if you don’t wish to become party chief; lead us in the fight against the BJP.” Congress chief ministers Kamal Nath, Amarinder Singh, Ashok Gehlot and Bhupesh Baghel, along with several other party leaders publicly called for Rahul’s return as Congress chief in the run-up to the Bharat Bachao Rally, asserting that he is “the only leader who can lead the party”.

Interestingly though, it was union minister Smriti Irani who defeated Rahul from Amethi in the Lok Sabha polls who gave the Nehru-Gandhi scion an opportunity to draft the attack which, many in the Congress now believe may prove to be the precursor for his return to the top post.

The recent spate of rape incidents in Hyderabad (Telangana), Unnao (U.P), Muzzafarpur (Bihar), the BJP’s collective silence on the crimes and the alleged involvement of saffron party leader Kuldeep Sengar in an earlier rape case from Unnao, became the basis of Rahul’s ‘rape in India’ barb against the Modi government. Irani’s attempt to twist the jibe and portray it as a “clarion call for rape” and her demand of an apology – backed vociferously by her BJP colleagues – prepared the ground for Rahul to assert at the Ramlila Maidan that he is “not Rahul Savarkar” and “will not apologise for speaking the truth”.

Congress sources say the process for bringing Rahul back as Congress president may now be accelerated though there are “obvious hurdles” that still need to be streamlined. “The Old Guard, which managed to wrest control of the party’s functioning after Sonia’s return as interim chief may not be very happy with his return.

A middle path may be explored by retaining seniors with strong political or organizational skills in key roles and assigning younger Rahul-confidantes as their deputies,” a leader said. He added, an organizational reshuffle has been kept on hold ever since Sonia returned and a plenary session of the party to appoint the full-term party chief is also pending.

If Rahul agrees to return as Congress president, the plenary may happen as early as next month before the Delhi assembly polls and the reshuffle may follow. Of course, in true Congress style, several leaders also caution that this momentum for Rahul’s return may also be lost if he falls back on the insistence of a non-Gandhi party chief.