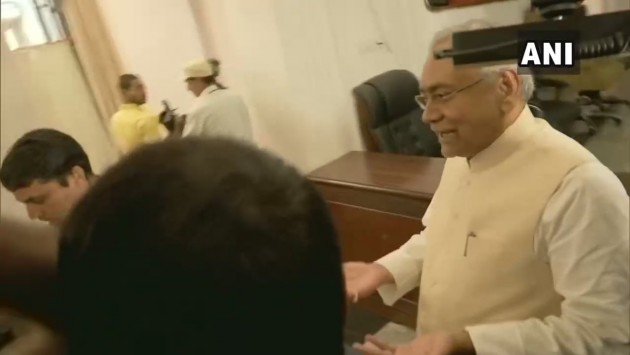 Even as hectic deliberations are underway in Maharashtra, where the Shiv Sena, Nationalist Congress Party (NCP) and Congress are pondering the prospects of an alternative government, Bihar Chief Minister Nitish Kumar has an interesting take to the political impasse.

When informed that Shiv Sena was quitting the NDA and asked to react, Kumar said, "Wo jaane bhai, ismein hamko kya matlab hai (What do I have to do with them? Let them see it for themselves).

Just like Sena, Kumar's JD(U) has had its differences with the BJP on a variety of issues and leaders from two parties are often seen making their disagreements public.

Political developments are taking place thick and fast in Maharashtra as Shiv Sena MP Arvind Sawant quit as the NDA minister on Monday morning. The resignation came the night after the NCP listed out a set of conditions for Sena if the latter were to think of getting the support of Sharad Pawar-led party.

Meanwhile, Congress has also swung into action and will consult its MLAs about extending support to an alternative government in the state.

Shiv Sena leader Sanjay Raut on Monday said his party is working towards a common minimum programme (CMP) with NCP and Congress in a bid to form a coalition government in Maharashtra.

"Sharad Pawar and Congress want that we should form the government which should run on a common minimum programme (CMP). There is a need for it today. We are working towards it," Raut said.

Amid talks that the NCP and Congress may support the Shiv Sena in government formation in Maharashtra, NCP chief Sharad Pawar has said whatever be the decision, the two parties will take it together.