At least 166 people, including six Jews at the Chabad House and nine terrorists were killed in the Mumbai terror attacks 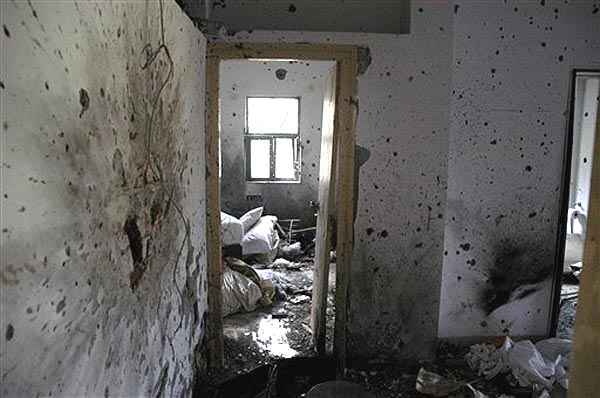 The Mumbai Chabad House, a Jewish outreach centre, at Nariman Point was one of the targets of the 2008 Mumbai attacks during which 10 terrorists of Pakistan-based Lashkar-e-Taiba (LeT) carried out 12 coordinated shooting and bombing attacks lasting four days across Mumbai.

At least 166 people, including six Jews at the Chabad House and nine terrorists, were killed and over 300 others were injured in the attacks.

"We have spoken to the Mayor of Eilat, Meir Itzhak Ha Levi, to set up a Memorial for the victims of Mumbai attacks. The Mayor said that he is on the committee which decides about street and square issues. He will be very happy to help," representatives of the Sitar Organisation for Immigrant Jews in Eilat told PTI.

"In addition, he suggested to even set up an India-Israel friendship square or Mahatma Gandhi Square where the memorial stone for the victims of Mumbai attacks could also be placed," they said.

The Chabad Movement's Synagogue in the city is going to put up a plaque in the memory of six Jewish victims at the Chabad House in the attacks.

"Rav Hecht has selected a wall inside the synagogue entranceway to put up a 3A paper size plaque. The message to be engraved on a hard plastic plate is written by the Rabbi himself," the Sitar Organisation said.

In a sombre ceremony last week, the Chabad House in Beersheva paid respects to the victims of 26/11 attacks, expressing outrage at the "senseless murders and killings" and emphasising on the "shared pains" with India.

The 12th anniversary of the Mumbai terror attacks, as per the Jewish calendar, fell on November 17.

"Rabbi Gavriel and Rivka Holtzberg, the Chabad emissaries who were killed in the dastardly attacks in Mumbai are remembered every year by the whole movement as our representatives in almost 4,000 centres across the world meet at this time. This year we had a 'virtual meeting' due to Coronavirus restrictions and we took a pause to pay our respects to the victims of the attack in Mumbai," Rabbi Zalman Gorlik, the Head of the Chabad House in Beersheva had said.

The current emissary of the movement in Mumbai, Israel Kozlovski, on the 12th anniversary of the attacks as the per the Jewish calendar, held the circumcision ceremony of his newborn son, Yosef Moshe Kozlovski, in the same room and at the same place where Rabbi Gavriel Holtzberg and his wife, along with other Jews, were murdered in the Mumbai attacks. Kozlovski has named one of his other sons after Rabbi Gavriel.