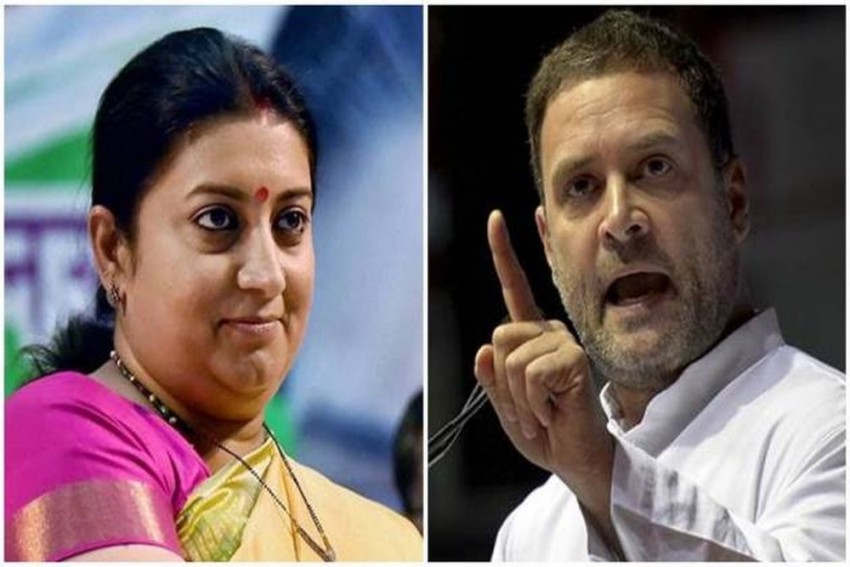 Union minister Smriti Irani will, once again, be the BJP’s candidate against Congress president Rahul Gandhi from Amethi in Uttar Pradesh in the upcoming Lok Sabha polls.

The announcement of the BJP’s first list of candidates for the upcoming Lok Sabha elections, on Thursday evening, has ended speculation on probable candidates that the saffron party will field in 184 constituencies. While the party is expected to announce its remaining candidates over the next week, a few key contests for the ensuing general elections are now clear.

Irani’s candidature from Amethi, the seat that the Union textile minister contested unsuccessfully from in 2014, although predictable, will once again be a high-profile contest since she is pitted against Gandhi. While Irani had lost the 2014 elections to Gandhi, she had brought the latter’s victory margin in the Nehru-Gandhi pocket borough to a worrisome 1.07 lakh votes. Gandhi had won his previous elections from Amethi, in 2004 and 2009, by margins of over 3.50 lakh votes. Though the sharp decline in Gandhi’s victory margin was largely due to the strong anti-Congress, pro-Narendra Modi wave in 2014, Irani assiduously cultivated Amethi in the past five years. She visited the central UP constituency often to interact with locals and, with the active support of Prime Minister Modi’s government, brought several schemes and projects to the constituency while telling its electorate that development had evaded Amethi for the long years that it reposed faith in the Nehru-Gandhi family.

Besides Amethi, the other contests to watch out for, after the release of the BJP’s first list will be from Muzaffarnagar and Baghpat in Uttar Pradesh, Asansol in West Bengal, Nagpur in Maharashtra and Thiruvananthapuram in Kerala.

In Muzaffarnagar, the BJP has decided to re-nominate sitting MP Sanjeev Balyan. Balyan, an accused in the 2013 Muzaffarnagar riots case, is the BJP’s Jat face in western UP. He had won the 2014 Lok Sabha election by a margin of over four lakh votes. A controversial leader, who served as a junior minister in the Modi government for a while despite the riots cases against him, Balyan is in for a tough challenge this time as he is pitted against Rashtriya Lok Dal chief Ajit Singh. The 80-year-old Singh, son of former Prime Minister Chaudhary Charan Singh, recently declared his candidature from Muzaffarnagar, leaving his traditional constituency of Baghpat for his son, Jayant Chaudhary.

Jayant, who has moved to Baghpat from the Mathura constituency that he represented in 2009 but lost in 2014, will be pitted against the BJP’s Satya Pal Singh, Union minister of state and a former IPS officer, known more widely for his comments dismissing the Theory of Evolution or his statements on how, in his opinion, women should dress and behave.

While Ajit Singh and Jayant are part of the alliance between Akhilesh Yadav’s Samajwadi Party and Mayawati’s Bahujan Samaj Party, the Congress too has decided not to field any candidates against them. As a result, both Balyan and Satya Pal Singh are up against candidates of a united Opposition, making their electoral fight interesting. While neither BJP leader has anything significant to show in terms of their achievement as MPs from Muzaffarnagar and Baghpat, they will, like a majority of the other BJP candidates, be hoping that Modi’s continuing popularity among a significant chunk of the electorate and BJP president Amit Shah’s shrewd election management will help them sail through in the upcoming polls too – just like it did in 2014.

In Nagpur, the BJP has named Union minister Nitin Gadkari as its candidate. Gadkari had won the 2014 Lok Sabha from Nagpur by defeating Congress heavyweight and former Union minister Vilas Muttemwar. Gadkari is among the few, if not the only, ministers in the Modi cabinet who is known to speak his mind before the Prime Minister and BJP president Amit Shah on critical political and administrative issues. He is also known for his administrative capabilities and as a minister who has performed well. The upcoming polls will see Gadkari pitted against Congress candidate Nana Patole. A former BJP leader, Patole was the first MP who quit the saffron party post its 2014 victory after slamming Modi for his failure to address farmer distress in the country, and in Maharashtra in particular. Patole’s candidature from Nagpur, supported by Congress ally NCP, has, however, not gone down too well with the Grand Old Party’s local unit who see him as an “outsider”. However, with his reputation as a farmer leader, Patole is expected to give Gadkari a tough challenge.

The BJP has predictably fielded Kummanam Rajasekharan from Kerala’s Thiruvananthapuram seat represented currently by flamboyant Congress MP and diplomat-turned-politician, Shashi Tharoor. Rajasekharan’s recent resignation from the post of Mizoram governor had triggered rumours that he would be the BJP’s choice from the Thiruvananthapuram seat. The capital of Kerala, a state that the BJP has been desperate to make in-roads in, has long been eyed by the saffron party as the place where it can finally open its Lok Sabha account from.

In West Bengal’s Asansol, the BJP has once again given ticket to sitting MP, singer-turned-politician Babul Supriyo. The seat is expected to see an interesting contest as Supriyo will be facing Trinamool Congress’ Moonoon Sen. Sen, a former actor and daughter of Suchitra Sen, one of Bengal’s most celebrated female actors, had made her stunning electoral debut in 2014 when she defeated CPM stalwart Basudeb Acharia from the Bankura seat. Acharia had been the MP from Bankura for a record nine terms before losing to Sen. Last week, Trinamool Congress chief Mamata Banerjee had decided to shift Sen from the Bankura seat to Asansol for the upcoming polls.