'It's Time To Chart Bold Ambition For Partnership Between India, Bangladesh': PM Modi

PM Modi promised that India will remain Bangladesh's partner as they jointly march towards the golden future millions of patriotic Bangladeshis and Indians gave their all. 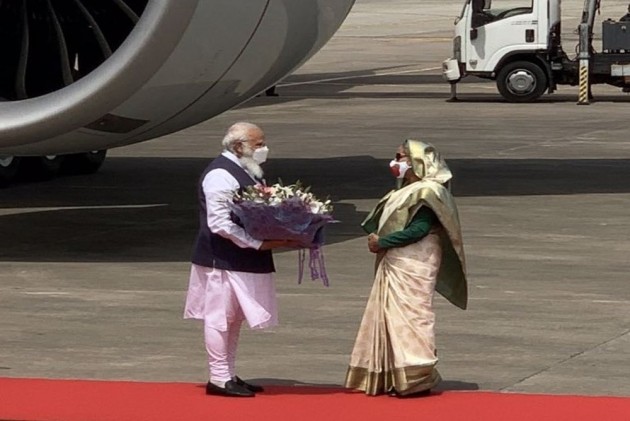 Prime Minister Narendra Modi has said that the brutal assassination of Bangabandhu Sheikh Mujibur Rahman, also known as 'Father of Bangladesh', in 1975 deprived the region of the destiny that could and should have been "ours to share" as he asserted that it was time to once again chart a bold ambition for partnership between India and Bangladesh.

PM Modi on Friday left for Bangladesh on a two-day visit during which he will take part in a wide range of programmes aimed at furthering cooperation between the two countries.

In an opinion piece titled ‘Imagining a different South Asia with Bangabandhu’ published in The Daily Star newspaper, Modi promised that India will remain Bangladesh's partner as they jointly march towards the golden future for which Bangabandhu, and millions of patriotic Bangladeshis, and indeed thousands of Indians, gave their all.

"It is time to once again chart a bold ambition for our partnership, as Bangabandhu would have done. With the spirit and enterprise of our people as our Bhagya Vidhata, the dispenser of our shared destiny, such a future is closer than ever," wrote Modi, who is visiting Bangladesh on his first trip to a foreign country since the outbreak of the coronavirus.

"As we look back on Bangabandhu’s life and struggle, I ask myself, what could our subcontinent have looked like, had this modern-day giant not been assassinated?" wrote Modi.

Modi said the Bangabandhu’s killers wanted to reverse the gains of Bangladesh's independence, for which he had led a heroic struggle.

"They also wanted to strike a mortal blow to Bangabandhu's dream of building a cooperative, peaceful and harmonious subcontinent," he said.

Despite unflinching commitment to his cause, and despite all the persecutions he suffered, Bangabandhu retained a generosity of spirit that is a mark of true greatness, Modi said, adding that the Bangladeshi leader's progressive belief in fairness, equality, and inclusiveness is captured in the words he wrote in the 1950s, "I know at least this much: no one should be murdered because he holds views different from mine."

"In him, we saw a tall leader whose vision went beyond the narrow confines of physical borders and social divisions. That is why we join our Bangladeshi sisters and brothers in celebrating Bangabandhu's memory in this very special Mujib Borsho," Modi wrote.

Modi said that with Bangabandhu at the helm, Bangladesh and the region would have evolved along a very different trajectory.

"A sovereign, self-confident Bangladesh, at peace with its neighbours, bearing friendship to all and malice towards none, was rising fast from the ashes of a painful war. If this had continued, perhaps India and Bangladesh could have achieved many decades ago some of the accomplishments that we were able to reach only recently," Modi said.

Citing the example of the 2015 Land Boundary Agreement between India and Bangladesh, Modi said that had Bangabandhu been at the helm longer, this achievement may have come much earlier. "Had that happened, our cooperation would have reached a different orbit all together, enabling development, economic growth and shared security," he added.

"I am sure that with his visionary world-view, Bangabandhu would have dared to dream something even bigger for our subcontinent. With the spirit of the Liberation War energising us, and with Bangabandhu as the guiding star, this region, at least the Bay of Bengal area, might have been in a different reality now," he said.

"We could have built a closely integrated economic region, with deeply interlinked value-chains spanning food processing to light industry, electronics and technology products to advanced materials. We could have created inter-governmental structures to maximise the economic, scientific and strategic benefits of a community of hundreds of millions of people," he said.

The two countries could have developed a vast multimodal connectivity network of roads, navigable rivers and riverports, railways, ports, container yards and airports, seamlessly integrated and coordinated through a Bay of Bengal transportation and logistics council, he said, adding that it could have allowed goods to move quickly and seamlessly, even multiple times during the production process, across IT-enabled and highly modernised borders.

"This is the Shonali Adhyaya that we may have been living in had it not been for that tragic Friday morning of August 1975. The assassination of the Father of Bangladesh deprived the region of the destiny that could and should have been ours to share," he wrote.

"And yet today, it is possible in this dawn of a new and rising Bangladesh to believe that this future is once again within our grasp," he said.

"Our exciting recent journey gives me hope. In a spirit of good neighbourliness, we have resolved complex issues amicably. Our land and maritime boundaries stand settled. We have substantial cooperation covering almost all aspects of human endeavour. Our trade has reached historic levels, aiding economic activities in each other's countries. Our people-to-people exchanges remain robust as ever," Modi said.

"In this historic commemorative year, we look forward to the completion of important connectivity projects like the India-Bangladesh Friendship Pipeline and the Akhaura-Agartala rail link. As our connectivity improves, our business will increase, our partnership will deepen, and we will open new vistas of cooperation," he said.

Modi said that he firmly believes that the two countries are once again striving towards a destiny that the Liberation of Bangladesh had once augured for the region.