He said an 'atom bomb' exploded in the House when Home Minister Amit Shah made the announcement. Azad said that a 'state was being removed from the map of India' by being bifurcated and by converting it into a Union Territory. 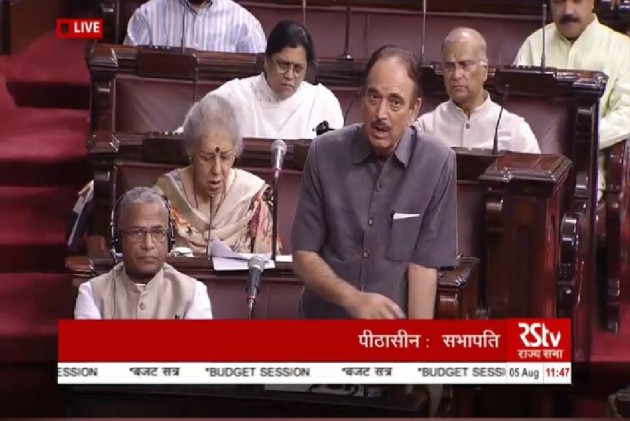 Senior Congress member and the leader of opposition in the Rajya Sabha Ghulam Nabi Azad on Monday said the Jammu and Kashmir's head which is considered as India's crown, has been "chopped off" and its identity removed after the government decided to do away with Article 370 and also proposed to bifurcate the state and make in its place Union territories.

"I had never imagined that the head of the state which is India's crown will be chopped off," he said.

"You have made light of the state of J & K," Azad said, charging it was a 'matter of shame' that the Centre had reduced the state to a non-entity with Lt Governor's rule.

"It will be a black blot on India's history when this Bill is passed (in Parliament)," Azad said.

He said an "atom bomb" exploded in the House when the Home Minister (Amit Shah) spoke on Monday, claiming that the "state was being removed from the map of India" by being bifurcated and converted into a Union Territory.

He observed that the people in the state of Jammu and Kashmir stood by the country's security forces and did not choose Pakistan despite it having the same religion. Instead, they accepted the secularism of India, he said.

"Today, you have again laid the foundation to disintegrate. Integration does not take place through legislation, it happens through the heart, Azad said.

He dared the Government to bring a Bill to convert Gujarat into a Union Territory, saying it should not take things lightly, and accused the Centre of muzzling the state's history while being "drunk" with power.

Derek O Brien of the Trinamool Congress described it as "Black Monday" and a dark day for the country's constitution, the idea of India, and the Rajya Sabha.

Opposing it, Manoj Kumar Jha of RJD said the (abolition of) Article 370 was not possible to execute in this lifetime.

Today we have opened the gates for Kashmir to turn into Palestine in five years, Jha alleged.
Tiruchi Siva of the DMK said the move was unconstitutional as the Constitution says that only the Assembly of the state should decide on such crucial issues.

The architects of the Constitution had given powers in this regard only to the state Assembly and the Central government has made this move when the elected Assembly is not in place, Siva said.

"MNCs (multinationals) would take over and it won't be the land of Kashmiris anymore," he claimed.