NC leader Mian Altaf said it looked like the whole thing was set up either by the government or the BJP to stage a drama to harm him and later blame militants. 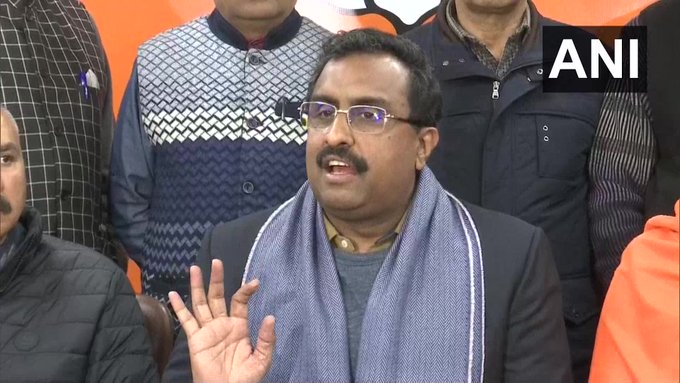 A visit of Bharatiya Janata Party (BJP) general secretary Ram Madhav to Kashmir has created a controversy with a senior National Conference leader saying he fears an attack as he refused to meet Madhav.

“BJP leader Khalid Jehangir Friday called me and told me that BJP national general secretary Ram Madhav will come to your residence to meet you. I told him there is no need to come to my residence as I have nothing to do with the BJP,” says senior NC leader and former Minister Mian Altaf.

“I never met Ram Madhav directly or indirectly and to keep the record straight I sent a message from my phone to Khalid Jehangir to convey to Ram Madhav not to visit my residence. Besides, he never discusses any politics with me," he said.

Altaf, a respected Gujjar leader, said it looked like the whole thing was set up either by the government or the BJP to stage a drama to harm him and later blame militants. “People understand these things,” he added.

However, BJP leader Khalid Jehangir described the statement as childish. He claimed that Madhav had previously talked to Altaf when the latter’s daughter had died some eight months ago. He said Madhav was on a visit to Ganderbal area. “I told him whether he was interested to meet former MLA Mian Altaf. I called Mian Altaf and he refused. That is all,” Jehangir said.

“I feel Mian Altaf sahib has overreacted to the situation by issuing a politically immature statement. He should have acted in a more matured way rather than issuing a statement which depicts desperation,” Jehangir said.

At present National Conference led by its President Dr. Farooq Abdullah is at the forefront of shaping the political narrative in Jammu and Kashmir. The party has pledged support for the Gupkar declaration.

On August 22, the party stunned BJP and the central government by issuing a joint statement that described abrogation of Article 370 as grossly “unconstitutional” and sought its restoration.

Sources told Outlook that the BJP is unnerved by the coming together of several parties including Congress, CPIM, CPI, National Conference, PDP, and Peoples’ Conference. The parties have sought restoration of Article 370. The BJP, according to sources, wants to create a rift within the parties by holding such meetings.